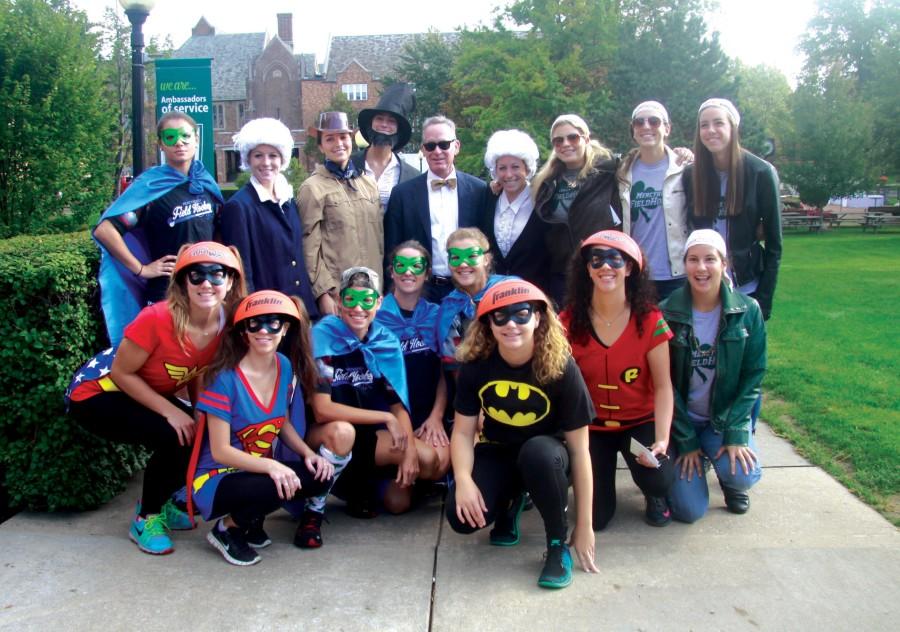 A group of enthusiastic students who took part in the scavenger hunt pose for a picture with President Victor.

Early in the morning on Hurst Day, bagpipes could be heard throughout campus, signaling that classes were replaced by a day of games, food and a scavenger hunt.
The idea for Hurst Day came from President  Michael Victor himself, and he asked several members of the faculty and staff to help him plan the event. The planning committee consisted of various faculty and staff members.
“The whole event was planned in less than four weeks,” Sarah Allen, executive director of Campus Involvement, said.
Allen and Courtney Olevnik, coordinator of student life,  contracted all of the inflatable games, DJ, t-shirts and volunteers.
The food was a highlight of the day, according to many students.
During lunch, a total of 2,400 meals and 54 gallons of ice cream were served. At dinner, 1,250 meals were served, including 936 steak dinners.
“President Victor insisted on having steak for dinner,” Allen said.
Traffic was high on social media sites for Hurst Day. The university’s Facebook photo album for Hurst Day reached 45,000 views and had 725 likes, comments and shares. On Twitter, Mercyhurst’s tweets were seen by 57,000 people. A photo of Victor and the university’s infamous hawk received 265 likes on Instagram. On Snapchat, Mercyhurst’s snaps peaked at 1,000 views per snap.
President Victor said he was pleased with the way Hurst Day turned out, and enjoyed interacting with students throughout the day.
“I want everyone to be happy, and I enjoyed all of the selfies that were taken with me,” Victor said.
Victor said the new tradition of Hurst Day is a way for students to bond, build Laker Pride and realize that he is accessible and here to support them.
“One day you will become an alumni, and if your children come here, they too will be able to participate in Hurst Day, and you will be able to tell them what you did during your Hurst Day,” Victor said.
Victor said he got the idea by incorporating Field Day, a staple at many elementary and middle schools,  and Mountain Day, a day celebrated at Lake Erie College in Ohio where Victor was president for almost 10 years, together.
“The only things I would change are more inflatable games, more food stations and more garbage cans,” Victor said.
The scavenger hunt was the main event that surrounded Hurst Day. Seventy-three teams of four signed up to participate. Those teams were narrowed down to 25 teams, which was further narrowed down to three and finally the first and second place winning teams.
First place winners received a GoPro and second place winners received a $50 gift card to the bookstore and a chance to go into a cash cube, where they could grab money flying through the air.
The winning team, “Team One Girl,” consisted of Daniel Marsh, Johannes Verwer, Meghan Doyle and Nicholas Doyle.
“At the beginning of the scavenger hunt my team and I were not very confident in regards to winning, but once we passed through the first two rounds we became super excited because we realized we had a chance,” Meghan Doyle said.
Doyle plans on using her GoPro in December during her trip to Disney.
The second place team, “Sistas of Mercy,” consisted of Kelsey Johnson, Raquel Guedes-Almeida, Megan Reindl and Sarah Johnson.
“I wanted to join the Hurst Day activities because I loved its element of surprise. During the scavenger hunt I was exhausted but having lots of fun,” Johnson said.
Johnson also said she thinks Hurst Day helped to raise school spirit and that she cannot wait to participate in it again.
Heather Kenny, a junior History major who attended had only positive things to say.
“The day was awesome,” said Kenny. “My favorite parts were the rock climbing wall, and of course the food.”