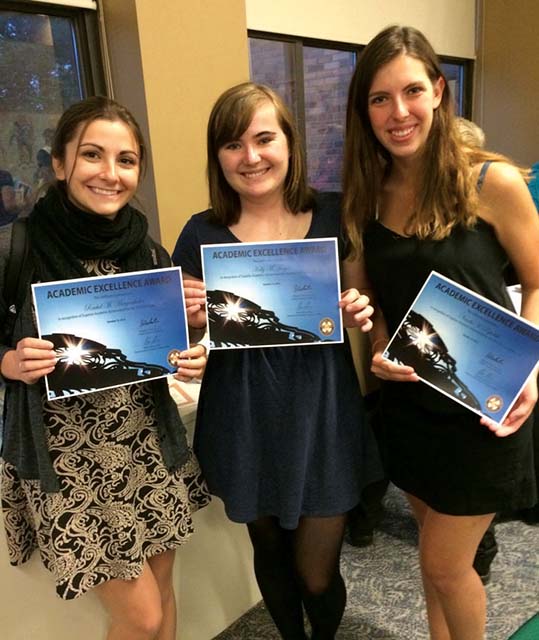 This photo was submitted by Kelly Furgus.

The Dean’s list took place Oct. 13 in the Mercy Heritage Room to honor students who excelled in their academics last year.

In the last academic year, 561 students earned Dean’s list recognition, in which 38 students achieved a 4.0 GPA. The event, took place on Oct. 13, began with a speech about the student’s academic success by Provost and Vice-President for Academic Affairs, David Dausey.

Dausey took the opportunity to praise and motivate students to keep up their good work.

“Education is the one gift in life that no one can take away from you,” Dausey said.

Senior Spanish Education major Alexandra Kleckner said she loved the speech, because it was motivational and it was nice to see President Michael Victor giving his support at the event.

“The event is inspiring and formal. People all dressed up nicely. It makes me feel honored for being here,” said sophomore Art Therapy major Kristen Burns.

To give these successful students recognition for their hard work, the Dean’s list event had various food stations for dinner. Two violinists played classical music, giving students room to bond with others and with their professors.

David Grabelski, chair of Intelligence Studies Department, said he was proud of the 63 Intelligence students who made it to the Dean’s list. To Grabelski, the event brought students of varying disciplines together and gave them a chance to mingle.

Many other departments chairs also joined to congratulate their students.

Psychology Department Chair, Gerard Tobin, Ph.D. loves attending events that celebrate the hard work of his students. The events have always been about celebrating their hard work, and Tobin is proud to be part of it.

Students also felt proud that their hard work paid off.

“Our university sees and picks out good achievement in academic and rewards it,” said Cole Lowe, sophomore Spanish Education major.

The event was so crowded that some people had to stand outside of the Mercy Heritage room during the speech. Burns, one of those standing outside, thought the event would have been better if they provided enough space for the large number of students.

Due to evening classes, many students left early and many others could not attend the celebration. Tung Hoang Vu, hopes that next year the event can held during the weekend or another time that does not coincide with evening classes.