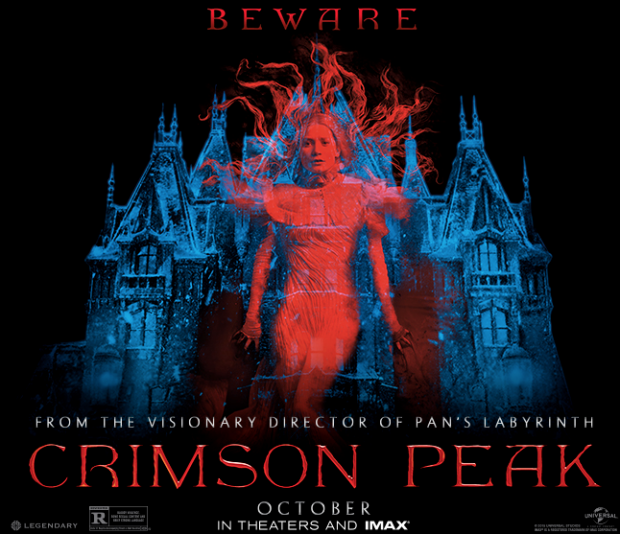 The horror movie "Crimson Peak" makes up in beautiful sets what it lacks in scariness.

If you love the creepy atmosphere of a good, old fashioned horror movie, then “Crimson Peak” is for you.
With several jump-scares thrown into a chaotic, revenge-seeking plot, “Crimson Peak,” directed by Guillermo del Toro, is bound to keep the audience awake.
It is easy to play with the cheesy trope of the “ghost” as it shows up only at night and whispers in a sing-song tone to its victim. This is what happens with the ghosts in the visually-stunning and well-acted, but disappointing and predictable haunted house movie “Crimson Peak.”
When the main character Edith Cushing, played by Mia Wasikowksa, falls in love with a mysterious young man, Sir Thomas Sharpe, played by Tom Hiddleston, family and friends begin to wonder about the pair.
When her father hires a private investigator to run a background check on him, he tells her to be careful.
Although several people offer the same warning, she falls madly in love with the young Sir Thomas.
Her father intervenes, deciding that Thomas is not the man he wants his daughter to be with, and he forces him to break Edith’s heart.
The next day, Edith’s father, played by Jim Beaver, is preparing for his shower when a stranger enters behind him, and smashes Mr. Cushing’s face into a sink until it is unrecognizable.
The couple reunites and are married shortly after the death of Edith’s father and move out of Crimson Peak Mansion, a house set atop a mountain made of blood-red clay, which offers the audience a hint to the mysterious and bloody history of the mansion.
After many frightening experiences within the house, Edith realizes that something is not quite right.
Sir Thomas’s sister Lucille, played by Jessica Chastain, is living with them, and her changing attitude toward Edith begins to confuse her.
After more unexplainable events happen, Edith realizes that Lucille has been poisoning her and tries to escape the mansion.
While “Crimson Peak” is one of the most beautiful and striking horror movies to make its big screen appearance in the past few years, even the carefully orchestrated color schemes, dark corridors and red metaphors cannot speed up the slow patches or make the audience care about the lead characters.
Unfortunately, the plot of “Crimson Peak” is not particularly original or chilling.
By time Dr. Alan, played by Charlie Hunnam, arrives in an attempt to save Edith, the plot itself is beyond saving.
While I would recommend seeing the movie for its stunning graphics, I do not suggest you make it a top priority to see this film.