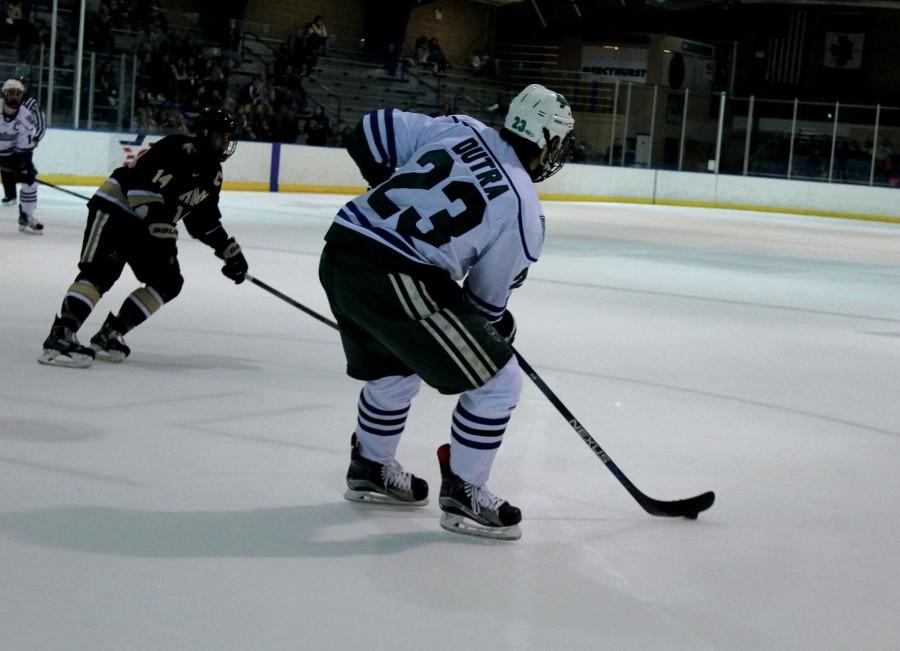 Junior Kyle Dutra (23) scored into an open net during the Lakers 4-2 win on Friday, Sept. 23 for his first goal of the season.

The Mercyhurst men’s hockey team swept the weekend series against Army on Friday and Saturday, Oct. 23- 24, winning the games 4-2 and 5-2.

“Our team is in a good spot. We recognize that we have a long way to go and that we need to continue to get better each day,” Head Coach Rick Gotkin said.

During Friday’s game, 1:44 into the first period, Laker freshman Derek Barach took a shot from the right wing and found the back of the net just under the crossbar. The goal was assisted by junior Philippe Drouin and senior Kyle Cook.

Army fought back during a power play and snuck one past sophomore goaltender Brandon Wildung to tie the game.

Two minutes later, the Lakers got a chance at a power play. Senior Anthony Mastrodicasa, playing his first game of the season, scored when he shot the puck through heavy traffic. The power play goal was assisted by freshmen Taylor Best and Lester Lancaster.

Just over a minute later sophomore Patrick Piacentini took a shot that went wide and ended up on sophomore Bryan Sienerth’s stick. Sienerth tucked the puck under Army’s goaltender to make the score 3-1 Lakers. Redshirt sophomore Jack Riley had the second assist on the goal.

Riley’s father is the head coach of the Army team.

“I personally just wanted to play well against my Dad,” said Riley. “Whenever we play them I always make sure to play my hardest because I know that’s exactly what he wants me to do.”

During the tenth minute of the third period, Army got another one past Wildung but it was not enough.

Junior Kyle Dutra picked up the loose puck and shot it down the ice to give the Lakers their fourth win of the season. Senior Mychal Monteith assisted the goal.

Wildung saved 37 of Army’s 39 shots to record his fourth win of the season.

“Brandon has been very steady to this point,” said Gotkin. “He’s made some great saves for sure and he’s been really good for us so far.”

During Saturday night’s game the Lakers got on the board first with freshman Chris Makowski’s first collegiate goal, assisted by sophomores Kane Elliot and Sienerth.

While on a power play, Army got one past freshman goaltender Adam Carlson to tie the game at one.

Sophomore Jonathan Charbonneau recorded his fifth goal of the season off of a rebound from Drouin. Freshman Josh Lammon had the second assist on the goal.

The Lakers then took advantage on a power play when Makowski recorded his second goal of the game by redirecting a shot by Monteith. Elliot had the other helper on this game winning goal.

At 3:10 in the third period, Elliot and freshman Matthew Whittaker assisted Drouin, to give the Lakers their two goal lead back and 5-2 win.