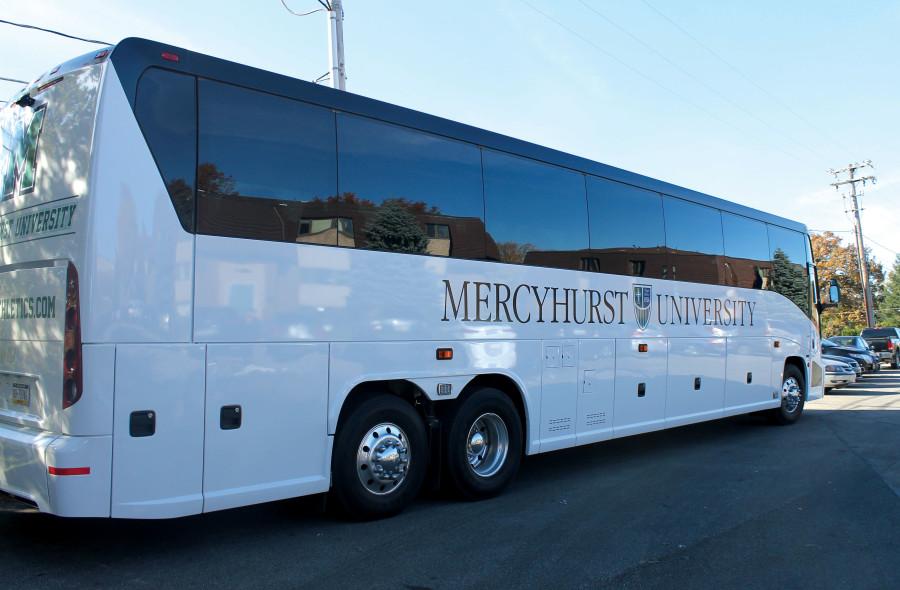 Mercyhurst debuted its two brand new university-branded buses in the front circle of campus on the morning of Thursday, Oct. 15.

The 56-seat white buses are complete with bathrooms, Wi-Fi and television screens. They also feature spacious and comfortable seating, conducive to the frequent long trips that Mercyhurst athletic teams make. The buses are also fuel-efficient.

The university previously rented its buses for games and other school events. After extensive negotiations with bus companies, Mercyhurst’s Chief Financial Officer, Hoa Nguyen, found that it is more cost-effective to lease, which is what the school ultimately decided to do.

Laura Zirkle, the vice president of Student Life, estimates that leasing the buses, rather than renting them on an event-by-event basis, will save Mercyhurst approximately $45,000 this year alone. In addition to saving money, she says that the buses will also serve as a driving billboard for the school.

“Before, our buses were very nondescript. Now, we have the added benefit of having our name out there. It’s a very good representation of what Mercyhurst is — and it gives us the chance to kind of show off,” Zirkle said.

Mercyhurst’s Athletic Director Joe Kimball first proposed the idea of getting new buses two years ago. However, Zirkle said it was not until this year, when President Michael Victor entered office, that Kimball’s suggestion became a reality.

“As soon as we started looking into it, it clearly made sense,” said Zirkle. “President Victor enacted the idea, and we had Mr. Nguyen performing negotiations on mileage and costs. We didn’t expect to get such a great deal.”

Although Mercyhurst’s athletes will get first priority when it comes to the new buses because of their frequent trips to other universities, they will be available for other purposes as well.

“We hope to not only have our athletes use them for more comfortable accommodations, but also to use them for things like admissions events, when we travel to local high schools,” said Zirkle. “Hopefully they can prove to be beneficial for recruitment.”

The buses generated a lot of enthusiasm among students, faculty and board members, on Oct. 15, when they sat in front of Old Main. Zirkle said she has heard nothing but positive feedback.

“We have received virtually no pushback on this one. I think the athletes are particularly excited to start using them,” Zirkle said.

Students have not ridden the buses yet, because the state of Pennsylvania needs to inspect the vehicles before the school can take them on any long excursions.

However, Mercyhurst expects these inspections to take place within the next couple of days, so the buses should be ready to use this coming weekend.