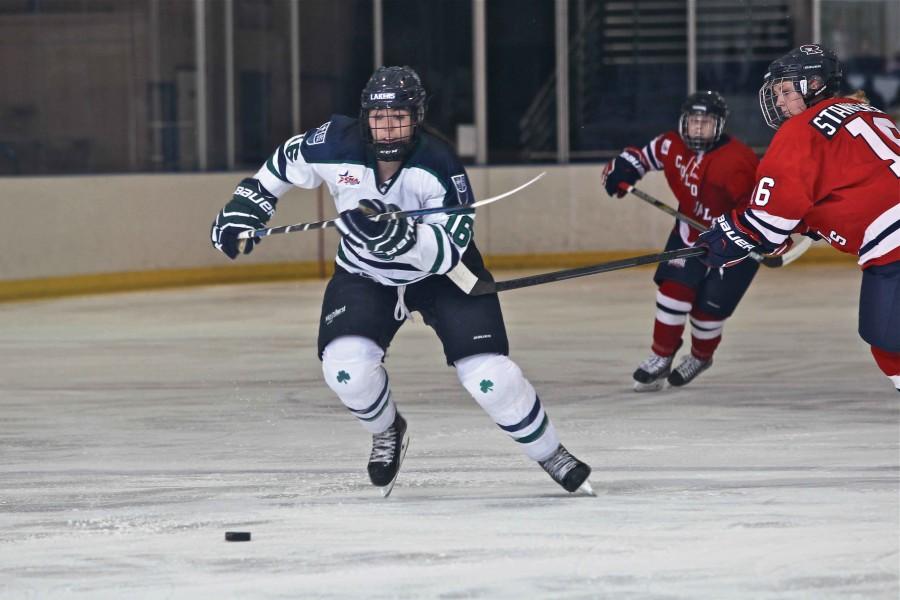 Ice hockey is a competitive, rough and demanding sport in which determination plays an important role. Although talent and skills are also significant, determination is what really brings one further in this sport. Senior women’s hockey player Jenna Dingeldein proves this on the ice every game.

With over more than 10 games played this season, Dingeldein has scored twice and has assisted three times, proving herself to be an important asset to the team. The Canadian player is always passionately trying to help her team succeed.

Although it has been an irregular season for the Lakers, they have shown a lot of personality in their last games, especially against Rochester Institute of Technology where Dingeldein led her team to victory with an overtime winning goal.

“When I scored the winning goal, I was very excited as it was a big conference game for us and the win was very important,” Dingeldein said.

After coming back from an early goal from RIT, Mercyhurst dominated the game with 32 shots, against 19 shots from them.

Not giving up was another important element that led the team to victory that day.

“I think the key to winning the game was making sure that we didn’t give up when we were down. We stuck together as a team and continued to work together and battle back and were successful in the end,” Dingeldein said.

Dingeldein knows that sacrifice and determination will be important in order to win the next games.

“Our expectations for every game of the season are the same. We expect ourselves to work hard, not give up, and put everything into winning. We want to go into every game playing how we know we can play and hopefully come out with wins.”

With an undefeated record the past four games and many great players like Dingeldein on the team, the women’s ice hockey team is in position to begin an important winning streak, leading them to an overall great season.

The women’s next games will be played at the Mercyhurst Ice Center on Friday, Nov. 13, at 6 p.m. and Saturday, Nov. 14, at 1 p.m. Saturday’s game will be in support of breast cancer awareness.