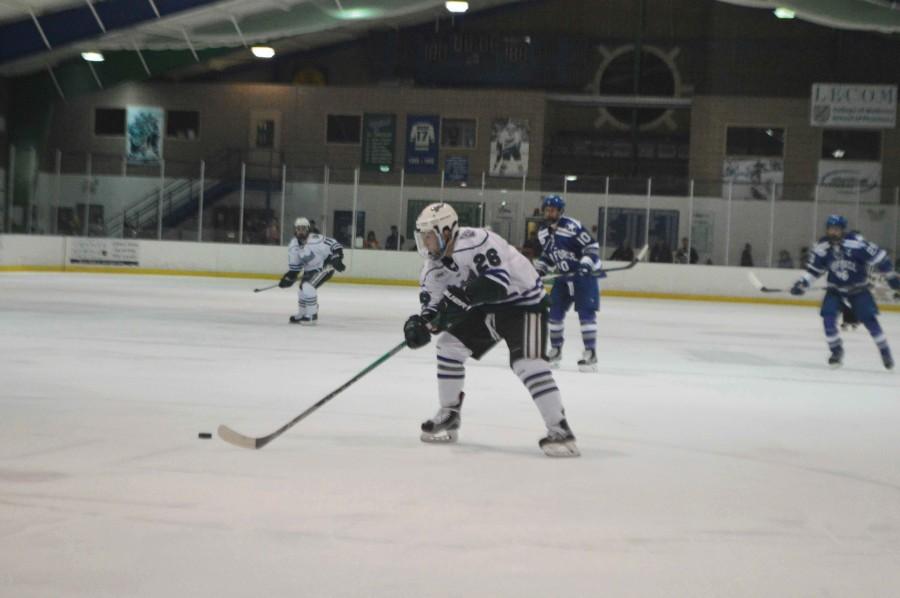 The Mercyhurst men’s hockey team split their weekend series against Air Force Academy to give Head Coach Rick Gotkin quite the birthday gift. With their win on Saturday, Nov. 7, Gotkin recorded his 500th win, becoming only the 23rd hockey coach to do so across all college divisions.

“He’s been the leader of our team, providing an environment where we can work hard and get better,” said senior Mychal Monteith. “He’s been at it a while and his hard work pays off.”

After a tough 5-4 overtime loss on Friday night, the Lakers rallied to defeat Air Force 3-1 on Saturday.

During Friday’s game, Air Force opened the scoring just over a minute into the game before Mercyhurst recorded three unanswered goals.

Redshirt sophomore Jack Riley, junior Kyle Dutra and sophomores Jonathan Charbonneau and Kane Elliot all recorded goals. Both Riley and Charbonneau’s goals were during a power play and Dutra’s was a shorthanded goal.

The score was tied 4-4 going into overtime when Air Force scored 3 minutes and 44 seconds to give the Falcons a 5-4 win.

During the second and third period, the Lakers scored three unanswered goals to defeat Air Force, splitting the weekend series and giving Gotkin his 500th win.

“I have been the benefactor of being at the right place at the right time and I couldn’t have done it without all of these unbelievable players and assistant coaches,” said Gotkin. “At the end of the day for me, this always is, and always will be about our players and their experience here at Mercyhurst University.”

Freshman Derek Barach started off the scoring spree at 8:22 with a goal assisted by Drouin and Charbonneau.

Lancaster was next when he found the back of the net, with under 30 seconds to play in the second period. Freshman Taylor Best and Dutra had the assists on Lancaster’s game winning goal.

To seal the deal, Riley slapped the puck down the ice for an empty net goal, to end the game at 3-1 Lakers.

“I’m glad it’s over, I’m glad that I was a part of it and really right now my biggest concern is 501,” Gotkin said.

The Lakers have the weekend off before hitting the road for five straight away games. The men will not return to play at home again until January 2016. Every game left is conference play.