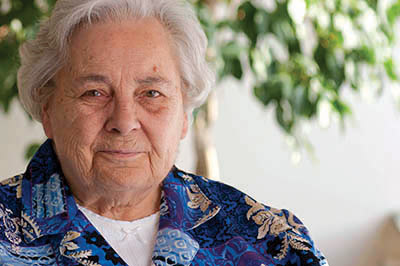 Sister Maura Smith, RSM, who passed away on Nov. 13, made many significant contributions to Mercyhurst over the years.

Mercyhurst President Michael T. Victor – noting her immense contributions to the university throughout her career – noted, “We lost a true Mercyhurst legend today.”

A 1948 Mercyhurst graduate, she taught biology and secondary education at Mercyhurst from 1970 to 1977. After moving on to leadership positions at Mercyhurst Preparatory School and with the Sisters of Mercy, she served on the Mercyhurst Board of Trustees from 1980 to 2012. She was named a trustee emerita at that time, but continued to weigh in on matters that would impact the college environment.

Sister Maura is probably best known for her commitment to environmental issues and responsible stewardship of the earth’s resources. She helped to create the sustainability studies program at Mercyhurst and co-founded the Green Team in 2000. After she received the Mercyhurst Sustainability Award in 2009, the university created the Sister Maura Smith Peace Garden behind Warde Hall to honor her. Mercyhurst’s annual Earth Day Lecture Series is also named for her.

As a professor, she was passionate not only about the environment, but also about social justice more broadly and the cause of world peace. The Department of Religious Studies presented her with its Oscar Romero Award in 2006, an honor that recognizes those “living the call of faith and justice in an extraordinary manner.”

While on the Mercyhurst faculty, she chaired two task forces that introduced new curricula to the college. It was at her urging that Mercyhurst developed its pioneering Learning Differences Program in 1986.

Sister Maura also spearheaded the development of the Continuum of Lifelong Learning, which joined Mercyhurst College and six other educational programs offered by the Sisters of Mercy into a network of learning experiences for people of all ages from preschoolers to senior citizens.

She lived for many years in the Mercy Campus House, a former farmhouse that used to stand behind Zurn Hall.

Mercyhurst honored her as a Distinguished Alumna in 1996.