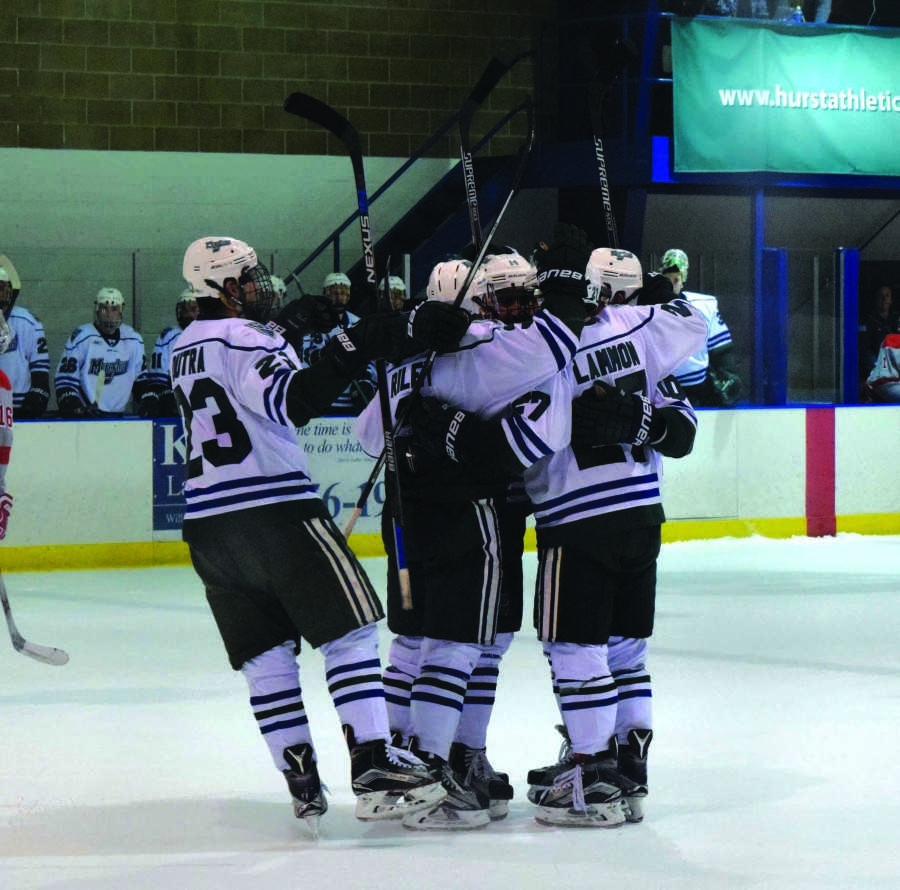 Mercyhurst got on the scoreboard first in their 3-2 win over Sacred Heart on Friday with a goal by freshman Josh Lammon.

The Mercyhurst men’s hockey team split their weekend series with Sacred Heart University with a 2-1 win on Friday, Jan. 15, and a 6-4 loss on Saturday.

“We were tied in the standings coming into the games and it was a big weekend for both teams,” Assistant Coach Greg Gardner said.

On Friday, freshman Josh Lammon started off the scoring with 1:22 to play in the second period, when he deflected senior Anthony Mastrodicasa’s shot, to find the back of the net. Redshirt sophomore Jack Riley also picked up an assist on the play.

At 14:11 in the third period, freshman Wes Baker gave the Lakers a 2-0 lead, with assists from freshman Derek Barach and sophomore Jonathan Charbonneau.

SHU put one home to bring them within one, but freshman goaltender Adam Carlson stood tall and gave the Lakers their 2-1 win.

“Adam is making all of the saves he is supposed to and is following the puck really well,” said Gardner. “He is a big part of our penalty kill and our defensive system and we are happy with the way he is playing.”

“We have to give credit to our penalty kill, they did unbelievable,” said Mastrodicasa. “They blocked shots, got it down the ice and did whatever they needed to do to make sure they did not score.”

On Saturday, the Laker’s power play unit got to work, but it was not enough to down SHU.

SHU started off the scoring just 3:54 into the first period.

The Lakers tied the game at one when junior Kyle Dutra scored on a power play, assisted by freshman Lester Lancaster.

“Sacred Heart has always been one of the fastest teams in the league and we knew we would have to match their pace coming into the weekend,” Riley said.

SHU took the lead again on their power play, but Charbonneau tied the game again at two. Charbonneau’s goal was assisted by Lancaster and Barach.

SHU scored two more goals to take a 4-2 lead over the Lakers.

Dutra scored his second goal of the game on the power play to bring the Lakers back within one, early in the third period. Mastrodicasa and sophomore Patrick Piacentini picked up the assists.

SHU then made the score 5-3, but the Lakers fought back on the power play with a goal from freshman Taylor Best. Barach and Charbonneau recorded the assists on Best’s goal.

The Laker’s pulled Carlson out of the net to get an extra attacker, but SHU put the puck in the empty net to win the game, 6-4.

“We will continue to get better and find ways to pick up points,” Head Coach Rick Gotkin said.

Mercyhurst will return to action on Friday, Jan. 22, and Saturday, Jan. 23, in an away series against Robert Morris University.