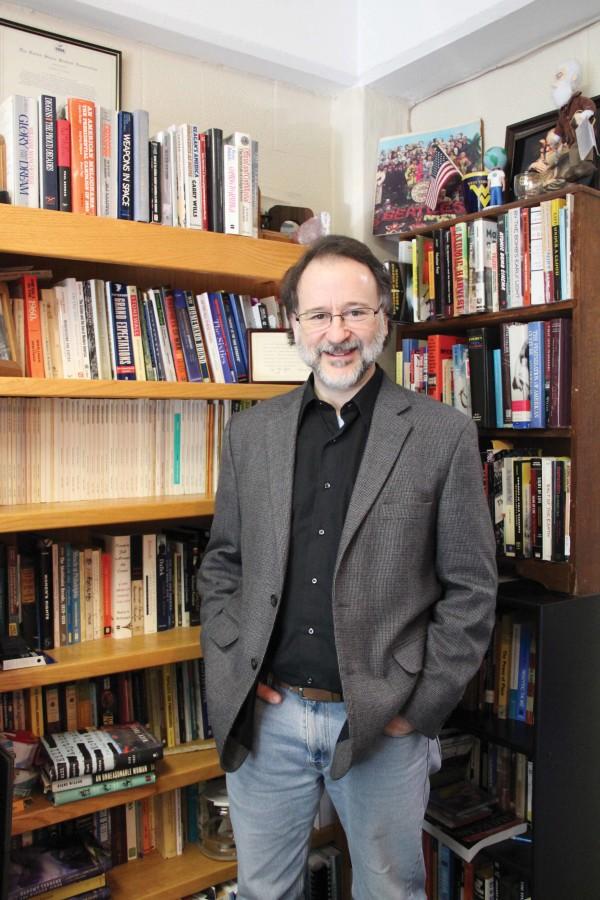 Chris Magoc was invited by the ABC-CLIO publishing company to write an encyclopedia on American imperialism and expansion.

Mercyhurst University’s Chris Magoc, Ph.D., Professor of History and Department Chair, has completed his sixth published book, this one an encyclopedia: Imperialism and Expansionism in American History: A Social, Political, and Cultural Encyclopedia and Document Collection.

Working as chief editor, Magoc produced the four-volume, 950,000-word encyclopedia, containing more than 200 primary source documents and 650 topical entries and sidebars from some 200 contributing scholars, centered around the topic of the history of American continental expansion and overseas imperialism since the nineteenth century. The entire project took over two years to complete

“It began with a phone call I received about the project in July 2012,” Magoc said.

He had written a short essay about the Military Industrial Complex for the publishing company ABC-CLIO, which had also published his previous book and they liked his work well enough to invite him to serve as the general editor of the encyclopedia project.

“I was honored to be asked,” Magoc said.

“Although I did not consider myself an expert, I leaped at the opportunity because American foreign policy—in particular the history of American overseas intervention and global hegemony since the late nineteenth century—is a subject I have taught for many years and which is of profound importance in our own time.”

Although Magoc oversaw the entire project, co-editor David Bernstein edited the first two volumes, which focused on pre-colonial and frontier continental western expansion. Magoc’s primary responsibility were volumes 3 and 4, which begin in the 1890’s and extend to the present. The contemporary era includes such topics as the oil industry, the rise of intelligence gathering, wars in Iraq and Afghanistan, growing U.S. presence in Africa and drone warfare. Magoc wrote 25 entries himself, in addition to the historical overviews for each individual section.

The subject of the book, while historical in nature, has grave implications for the present and future of the country.

“You see it in the candidate debates going on right now with both incendiary and substantive rhetoric thrown about over the proper role of America in the world,” Magoc said. “There is a growing recognition that America is an empire – an empire of a different sort than Great Britain or ancient Rome – but an empire nonetheless.”

Magoc hopes the encyclopedia sheds light on how that came to be and what it all means for, as he says, “a country whose Founders warned of imperial overseas adventures and even a permanent standing army.”

Magoc has donated an encyclopedia set to the Hammermill Library—”the least I could do,” he said, given the support he received from Mercyhurst in completing the project.