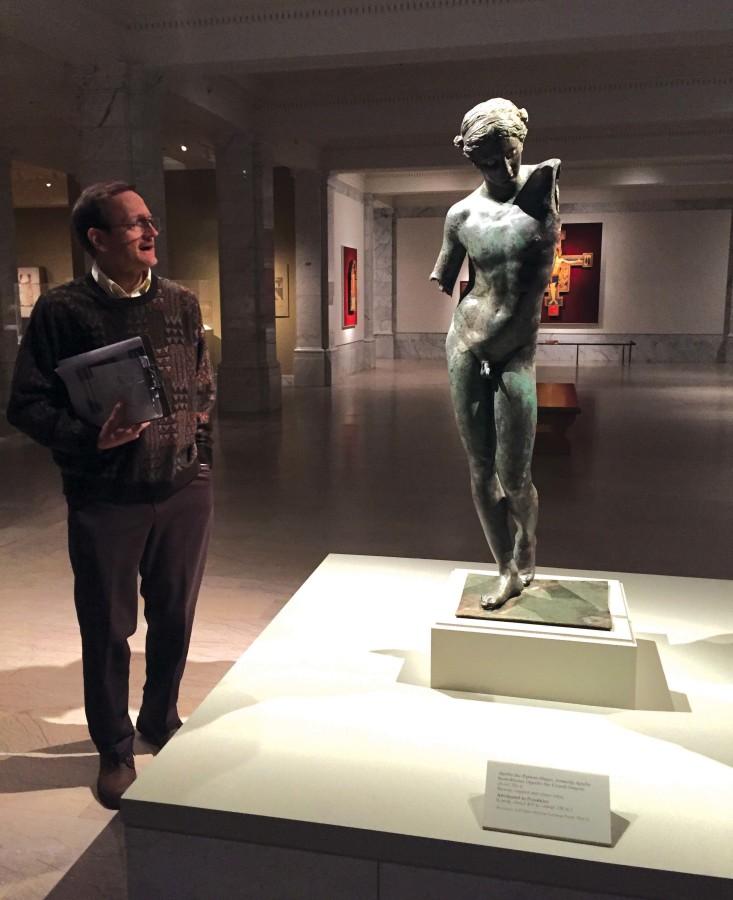 The “Cleveland Apollo” was one of the many artifact seen by students at the Cleveland Museum of Art.

Scott McKenzie, Ph.D., teaches the Science on Display J-Term course, which revolves around museology and cultural-heritage laws. This has been one of the most popular J-Term offerings this year with the slots filling up quickly and providing students an opportunity to explore new worlds and ideas.

On Friday, Jan. 8, students toured the Cleveland Museum of Art with their professor as their guide. On Friday, Jan. 15, the class headed to the Carnegie Museum of Natural History in Pittsburgh. Among the major sights was a statue termed the “Cleveland Apollo” which has its arms notably dismembered.

“For ancient art, the Cleveland Museum of Art is the place to go and it’s just a couple hours down the road and Carnegie is also close to Mercyhurst. We’re in a position where we can hit these different places in a fraction of a day and have a great time here,” McKenzie said.

However, with the end of the J-Term in Mercyhurst, McKenzie will have to make a decision regarding the course’s future. His goal is to turn the class into a mini-semester course beginning in autumn 2016, with 50-minute classes and the potential for an associated lab period where he can schedule off-campus trips.

“We could actually expand the number of places that we visit, and that would be delightful,” McKenzie said.

McKenzie has been collecting all types of artifacts throughout the years. He routinely displays his collection to his students, along with the display of minerals and various animal records outside his classroom on the second floor of Zurn Hall. His primary objective is to present information and heighten awareness.

“I wanted to find a science course that covered a lot of issues that usually don’t get covered and be able to present it to a lot of students,” McKenzie said.

“The first thing is to present information for general education purposes. I think it helps us appreciate where we live more. A lot of times, people walk by some of these things and don’t notice them such as meteorites and fossils. Maybe after a class like this, you’ll start to notice the fossil on the side of the road, or you’ll notice some strange insect or an unusual artifact in the attic…and get more enjoyment out of life in that way.”

In the first two weeks of the 3-hour class, McKenzie demonstrated several facets of the course’s central theme of museology. He led discussions centered around geology, archaeology and what McKenzie terms “cultural-heritage laws.”

McKenzie noted that a secondary objective for the course is a valiant attempt to “win over” prospective students to declare geology, biology, and other science majors.

“The thing is to direct people with strong interests in this stuff into fields that they might really enjoy and find helpful,” McKenzie said.