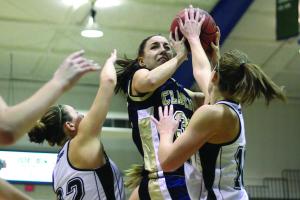 The Lakers are looking at their first conference play-off berth since the 1999-2000 season when they played in the GLIAC. This year, with a 13-10 record overall, they have climbed the Pennsylvania State Athletic Conference rankings to third place.

Thanks to a 5-3 record in conference competition, the Lakers took the command in their quest for a play-off spot. After beating Lock Haven, who is fourth in conference, Mercyhurst has sole possession of third place. The Lock Haven game was a point of concern, especially after Edinboro University beat Mercyhurst by nearly 40 points only a few nights earlier.

But the team was able to pull together.

“We need to refocus and be more disciplined…and remember we are a solid team and program,” head coach Deanna Richards said.
A pair of seniors has led the Lakers this season, providing leadership both on and off the court.

Senior captain Amy Achesinski, recently named to the Academic All-District team, leads the Lakers with 18 points per game and has scored in double digits in 21 consecutive games.

Achesinski also leads the team in rebounds while shooting 60 percent from the field—best in the conference.

At times, the Lakers have relied heavily on Achesinski to provide the offense.

In the Edinboro loss, the Lakers struggled to get anyone besides her going offensively.

“I don’t mind leading the team in that role. It’s a good pressure,” she said.

Senior guard Samantha Loadman is also a major contributor to the team’s success this season. She averages 10 points and five rebounds per game. She leads the team in 3-pointers and free throw percentage at 94 percent.

“I know my role is to be a shooter,” Loadman said. “I need to learn from my mistakes and not make them later.”

Both seniors have been contributing for four years, but it is sophomore Dana Banda, who has started every game in her first two seasons, who sets the tempo. Banda leads the team with 88 assists, is second in steals with 34 and third in points.

“Dana sets the standard with 100 percent effort all the time, she is like a veteran in how she carriers herself,” said Richards.

The Lakers are continuing a program turnaround that started four years ago when Richards, Achesinski and Loadman all came to Mercyhurst.

With an improving record each of their first three years, these Lakers have already surpassed last year’s win total of 12.

“Experience is a huge factor, and the chemistry is great,” Achesinski said.

“Maturity is a big difference. We hurry a lot. Our theme is to be quick but don’t hurry…the little things make the difference,” Richards said.

The Lakers take on Clarion on Wednesday and California (Pa.) on Saturday.