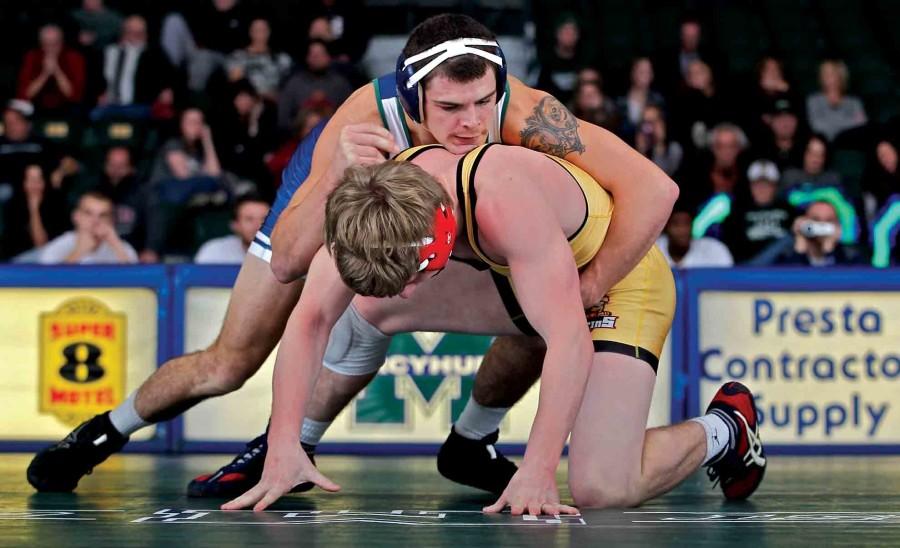 Redshirt senior August Mizia (above) is ranked third in NCAA Division II. He is among three teammates in the top 8.

The Mercyhurst wrestling team is ready to take on University of Pittsburgh at Johnstown to decide who will be the next PSAC champion.
After staying undefeated, 5-0, through the PSAC so far this season, the Laker wrestlers are now getting ready for their most important match of the season against Pitt-Johnstown, who is also undefeated.
Even though there is a rivalry between them, the Lakers feel confident about the match knowing that they have beat them three of the past four times.
“I’m confident that we will. I am always confident. I am an optimistic, confident person,” Head Coach Mike Wehler said.
Last season, Mercyhurst won 24-15 over UPJ giving them their third consecutive PSAC title.
According to Wehler, these wrestlers not only exceed in the athletic front, but in every aspect of life. The team has had the best GPA in the conference three of the last four years.
“I couldn’t be prouder. They’ve worked really hard, they are really talented, they have performed well.
“It’s definitely the best group of people I have step foot on this campus. They are high-character kids, they achieve well in the classroom, they achieve incredibly in athletics. The school should be proud of these guys,” Wehler said.
On a personal level, there are two wrestlers on the team that are doing outstanding this season, August and Francis Mizia. In fact, they are both leading the NCAA DII wrestling in technical falls. Francis is No. 1 with seven technical falls, and August is at the No. 2 spot with six. Although there is an intense competition among the Mizia brothers, the family spirit always stays first.
“It’s all fun. It’s cool because it’s light. I’m not going to be really bummed if I lost to my little brother,” August said.
The team’s success comes down to two important factors. According to August, camaraderie is what has taken them so far. They’re about as tight as they get. Everybody stands up for each other and they take a bullet for the next guy. Second, Coach Wehler has played an important role. More than just a good coach, August thinks that Coach Wehler is someone you can rely on and look up to.
The wrestling team will travel to face Pitt-Johnstown this coming Saturday, Feb. 13, to try to finish this incredible season by becoming PSAC champions.