A performance for a new generation 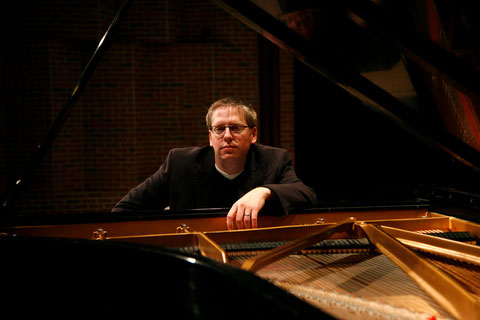 Nicholas Phillips, D.M.A., pictured above, will be performing a recital at Mercyhurst University.

Nicholas Phillips, D.M.A., will perform a piano recital at Mercyhurst University on Sunday, Feb. 21, at 3 p.m. in Walker Recital Hall. Phillips is an associate professor of Music at the University of Wisconsin – Eau Claire. His program is titled “Playlist for a New Generation” and it is comprised of pieces written by American composers within the last 10 years. Phillips is on tour with this program and is performing across the country.
He is a soloist and collaborative artist. His specialty is recording and playing modern contemporary music.
Phillips has performed across the United States and has made international appearances which include a solo recital in Korea sponsored by the U.S. Embassy, and solo recitals in Buenos Aires, Argentina and Vilnius, Lithuania.
Phillips has given lecture-recitals and presentations at a number of international, national and state conferences. He holds degrees in piano performance from the University of Missouri-Kansas City Conservatory of Music, Doctor of Musical Arts; Indiana University, Master of Music; and the University of Nebraska-Lincoln, Bachelor of Music, summa cum laude. His teachers include internationally renowned pianists and pedagogues Karen Taylor, Paul Barnes, Karen Shaw and Robert Weirich.
His relationship with Mercyhurst University is through Nathan Hess, D.M.A., who states that “the music world is very small so there is about three degrees of separation between most musicians, especially between college and university teachers.” Hess knows Phillips through a mutual friend with whom he went to graduate school. Hess asked her three years ago if she knew anyone in the Midwest that he could ask to play at their school. She went to school with Nicholas Phillips and advised Hess “to email him and ask to do some sort of exchange where he would play at their school in Wisconsin and Phillips would come play here at Mercyhurst,” said Hess, and that is what he did.
Hess said that they had set up a time for him to travel to Eau Claire, Wisconsin last March and did a Piano Recital and Masterclass. They scheduled a time for Phillips to come to Mercyhurst.
“That is how the relationship with Dr. Phillips came about,” said Hess. “As professors, we always want to try to get out there and perform at other places just to try to advance our careers and get more performing and professional experience.”
Phillips’s program includes Eine Kinda Bachmusik, Part 2 from 3 Preludes to Missing the Point written in 2006 by Doug Opel, Tango Gardél by Stacy Garrop, A Hudson Cycle by Nico Muhly, The Currents by Sarah Kirkland Snider, First Ballade by Judd Greenstein, Shards by Jonathan Pieslak, From “The Piano’s 12 Sides” White Moon Over Water She Steals Me by Carter Pann and Hommage à Trois Luca’s Swell: Hommage à Aaron, Copland Gestures: Hommage à Toru Takemitsu, Funk for Nikki: Hommage à James Brown by Mark Olivieri.
The recital is free and open to the public, so come and listen to modern compositions performed by a contemporary music specialist.