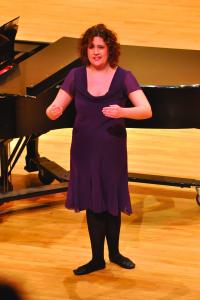 Tyler Stauffer photo: Spinelli performed “Les Oiseaux dans la Charmille” at Tuesday’s Student Forum.Mary Spinelli, a Senior in the D’Angelo School of Music, is able to do it all and then some. Spinelli not only sings operatic repertoire, but writes her own as well.

“As long as I can remember, I’ve always been singing,” Spinelli said.

Through the unconditional support of her parents, music and writing became a part of her life at an early age.

“For me it’d be terrible if I didn’t create because it is so much fun.”

Spinelli began composing in high school. It was not until her arrival at Mercyhurst that she began seriously composing under the tutelage of Dr. Albert Glinsky, professor of composition.

She is currently in the process of composing an original opera called “The Divine Corruption.”

Portions of the opera were performed Feb. 5 at the Music department’s Composer’s Concert.

In writing “Divine Corruption,” Spinelli says that she was inspired by the film “There Will Be Blood” and the novel “Oil” by Upton Sinclair.

Upon graduation, Spinelli has big plans for herself which include continuing the development of her opera and vocal studies.

“Mercyhurst has definitely prepared me for my future: if I can write a paper, learn a Mozart aria, and compose…I can do anything.”

And based on Spinelli’s performance in Student Forum on Tuesday, it is apparent that this young woman is capable of anything.

In the aria, the character is a mechanical doll that has no feelings. According to Spinelli, such a static role is unusual for opera which typically consists of the highest forms of human emotion.

Through the comedic physicality of a rigid doll, Spinelli not only sang angelically but had her audience smiling and laughing at the humor of it all.

“For me, the best part of being a musician is finding music in the mundane.”

A breath of fresh air to those acquainted with her, it is clear that Mary Spinelli’s life is anything but mundane.

Through her evident love and passion of life, it is doubtful that Spinelli will ever have an unhappy, unimaginative future.