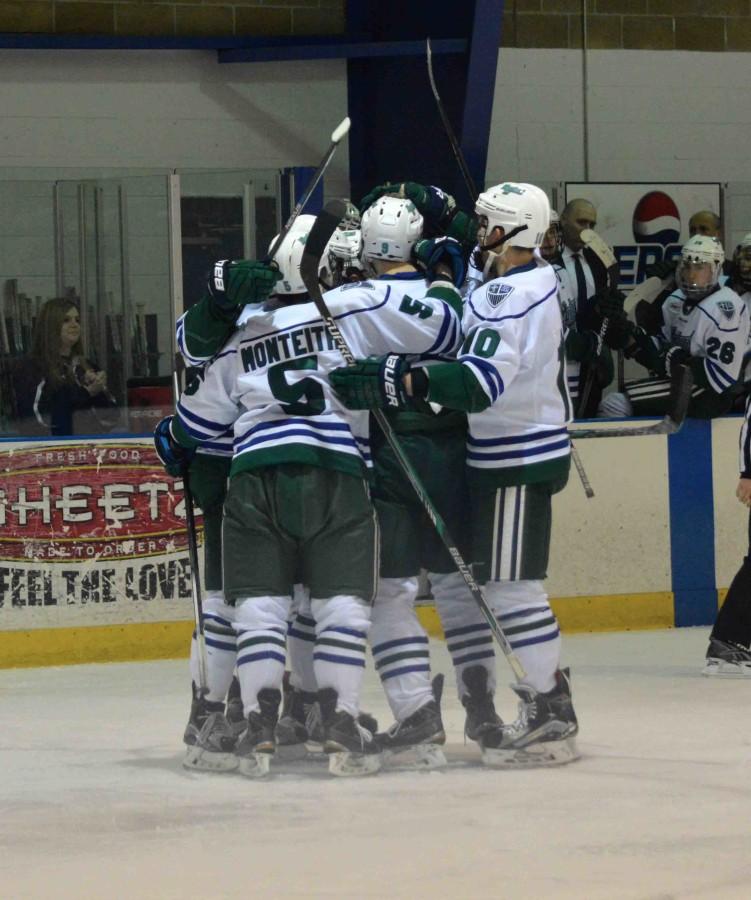 Teammates on the men’s hockey team celebrate after a goal scored during Saturday, Feb. 13’s 2-2 tie against Niagara University. Goals were scored by Lester Lancaster and Kane Elliot.

With 45 goals combined, the 13 freshmen of the men’s ice hockey team have stepped up throughout the season to show they deserve to be on this Division I team.

These freshmen and sophomore Lakers have not only proven to be important assets to the team, but have earned respect from many senior teammates.

“All the freshmen have already developed so much this year that we really don’t even consider them freshman anymore. A lot of those guys are already some of the leading scorers on our team,” senior Kyle Cook said. Cook has six goals and 11 assists this season.

According to Cook, there is great chemistry between everyone on the team. They spend most of their time together between classes, workouts, practice, meals and just hanging out.

Freshman Jeremy Wu knew from junior hockey that playing on a DI team was not going to be easy.

“It’s definitely what I thought it would be. It is way faster than the junior hockey. I think my first few games of the season helped me to adapt, since we got a lot of injuries so I had to play. After Christmas break, my game was better. Now I’m more comfortable, as well as the other freshmen,” Wu said.

These freshmen earned respect within the team and the school this season. Also, their work has been recognized within the division. According to Wu, freshman Derek Barach won rookie of the year in the Atlantic Hockey Association.

Barach is leading the team in points with 27 and is tied at second in goals with 10, just one goal behind sophomore leader, Jonathan Charbonneau.

Another freshman who is exhibiting excellent hockey is goalie Adam Carlson. Carlson is having an excellent season with 437 saves and only 40 goals allowed throughout the season, according to HurstAthletics.com.

There is a reason why the freshmen have done so good this year, and that reason is Head Coach Rick Gotkin. With 28 seasons as head coach of the Mercyhurst University men’s ice hockey team, he understands how to handle a young team.

“I really like Rick. He knows how to handle the young players and to motive them,” Wu said.

After two intense matches against Niagara University ending 2-2 for both games, the Lakers are getting prepared to take on Army at West Point, N.Y. this coming weekend, Friday, Feb. 19, and Saturday, Feb. 20.

The Lakers have just four regular season games left. If they perform well, they will head to the playoffs which start in March.