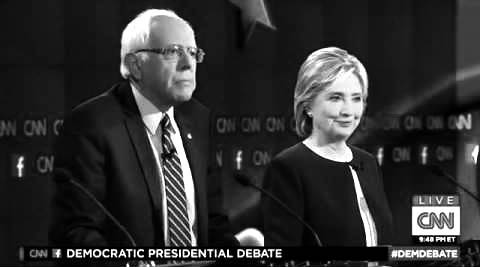 “A Political Revolution is Coming,” “A Future to Believe In,” “Not Me, Us.”

These are just a few of the slogans used so far in Vermont Senator Bernie Sanders’ presidential campaign. What started out as a grassroots movement has expanded into an increasingly intense competition for Democratic “front runner” with former Secretary of State Hillary Clinton.

With all of these slogans from Sanders’ side, focusing on the future and change and potential benefits for the country in the event of his election, surely Clinton has developed an awe-inspiring slogan for her campaign?
The result: “Hillary for America.”

What does that mean? That was her slogan used in her ill-fated 2008 presidential run as well. Was she not able to conceive of a catchier, more meaningful saying to bolster her campaign as Sanders has?

Sanders’ slogans, many of them created by supporters online, serve as more of a rallying. Clinton’s slogan sounds more like something you might see posted on the wall of a high school while students are campaigning for student government.
Sanders’ political ideals and aspirations have been consistent throughout his time in politics, and have still yet to sway in the pressure of a presidential run this year. For example, Sanders walked with Martin Luther King Jr. during the civil rights movement and still is a strong civil and social rights activist today.

Clinton’s ideals, on the other hand, seem to change on a daily basis. She seems to change her opinions when it is convenient for her, which raises red flags, in my opinion. According to CNN, Clinton openly opposed gay marriage during her 2008 presidential run (so did current president, Barack Obama). It wasn’t until Clinton was safely out of her position as secretary of state in 2013 that she started to change her stance on the matter.

The result of the Iowa caucus really shook things up for the news media and for the Clinton campaign. The 74-year-old man with crazy hair got 49.6 percent of the democratic vote. Clinton just barely squeaked ahead with 49.9 percent. In addition to this, some of the towns in Iowa in which Clinton won by a coin toss due to the narrow margins.

With the Iowa Caucus basically a tie, Clinton boasted over social media that New Hampshire would be different and she would come out firmly on top as the Democratic frontrunner. She could not have been any more wrong. Sanders tallied in a grand total of 60.4 percent of the vote, this time clearly ahead of Clinton’s 38.4 percent.

There must have been a reason for this shift in the polls. The day before the New Hampshire Primary, MSNBC reported that the FBI formally stated that they were investigating Clinton’s private email server. Is someone who is currently under FBI scrutiny really the person we want as president?

As if that was not bad enough, the Clinton campaign made headlines when, at a Clinton rally, former Secretary of State Madeleine Albright stated that there “is a special place in hell for women who don’t help each other.” Hillary thought this insensitive remark was funny and proceeded to laugh.

I, for one, refuse to vote for a presidential candidate because of his or her genitals. The Clinton campaign seems to be attempting to avoid speaking of policy and would rather try to shame women voters into voting for Hillary because of her sex.

In addition, Gloria Steinheim, a renowned feminist critic and outspoken Clinton supporter, seemed to shame young female voters who were not supporting Hillary by saying that they were into politics “for the boys.” I have little to no respect for anyone who so boldly shames any human being, and I feel that the Clinton campaign is driving voters away rather than gaining support by using such tactics.

So, to quote my favorite meme recently circulating on social media: “Apparently women are going to hell if they don’t vote for Hillary. I guess I’ll BERN.”