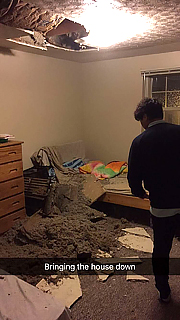 After the ceiling caved in on a third floor Lewis Avenue apartment, the students were relocated to a new residence.

It happened around 12:30 a.m. on the third floor of the building. The collapse happened with the residents still inside. Sophomore Kishan Singh, one of the residents, said he was sleeping when he heard a loud noise and felt a sharp jolt of pain on his shin.

Singh said he was lucky he changed his sleeping habits.

“That night I just so happened to have my head on the foot of the bed. Had I slept like I normally do, I could have been concussed, or worse,” Singh said.

The residents immediately called Police and Safety, who came immediately and assessed the situation. Members of Residence Life came 45 minutes later, according to the residents.

The students were relocated that night to the basement apartment in the same building. That night the residents said they could hear another loud thud as more of roof fell two floors above.

Facilities Director Micah Narel, along with facility engineers, concluded that the collapse is the result of a number of factors, one of them being the use of screws instead of nails.

Although both meet the current code requirements, nails loosened somewhat due to vibration from strong winds, reducing their hold capacity.

“On the night of Wednesday, Feb. 3, campus experienced significant wind from out of the northwest. In addition to vibrating the roof, this wind passed into the attic space through vents designed to allow for moisture release and heat balancing airflow,” said Narel.

“The high winds caused a slight overpressure in the attic space. … Combined with the added weight of the textured ceiling, and the reduced hold of the aging nails, it was enough to cause the ceiling to let go, dropping the drywall, plaster and insulation into the room below,” he said.

After the incident, Maintenance conducted two days worth of inspections and pressure tests on upper floor apartments.

“We looked for areas of concern. We found that in that same building, 3925 Lewis, there needs to be some reinforcing of the upper ceiling as it showed some aging,” said Narel. The buildings are nearly 70 years old.

“We are working with the university and have a plan in place to make these upgrades during spring break and throughout the summer to make sure that this won’t happen again.”

Three days passed and the residents requested living in the Wayne apartments as a form of compensation. They were told they would have to pay extra money. It was not until Singh contacted his older sister and U.S. legal guardian for legal advice.

“She’s the one that got the ball rolling for us to move to Wayne,” Singh said. Singh’s sister ended up calling the assistant director of housing and the following day, with the help of maintenance, the residents moved to Wayne.

Even after the move, the residents were not fully satisfied with their new living situation.

“The new apartment has cold water while showering, and the WiFi doesn’t work in the bedrooms because the connection isn’t good enough,” junior Yoesar Gyaltshen said.

Narel said that students in all other apartments in the Briggs and Lewis buildings are completely unaffected because the construction of ceilings in middle and lower level apartments is different than top floor ceilings.

“These ceilings are at no risk for a similar incident,” Narel said.

Narel said if students have any specific questions or concerns about their residencies, engineers will be happy to speak with them or examine their specific locations.