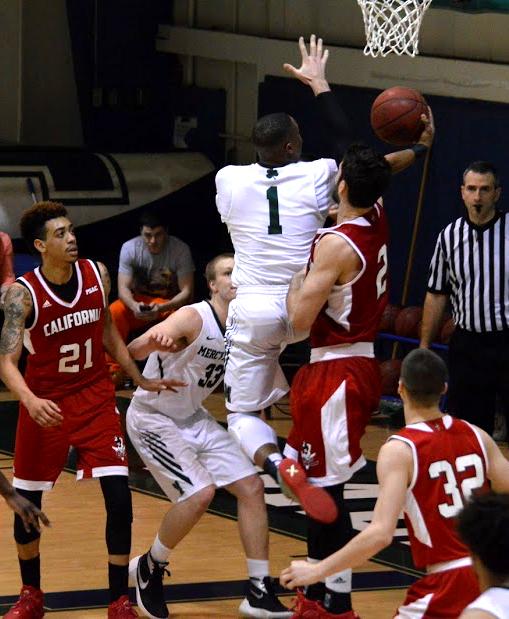 Senior Damon Jones (1) ranks 12th in the PSAC in scoring. Jones scored 15 points in Mercyhurst’s win over Cal. U.

Mercyhurst men’s basketball team secured the No. 2 seed in the PSAC West after their 65-38 win over California University of Pennsylvania and Edinboro’s loss to Seton Hill.
On Saturday, Feb. 20, the team faced Cal. U on senior day, in which the points in the paint were the key to the win. The Lakers’ strong defense was in full force, holding Cal. U to 38 points. This is the second lowest number allowed by the Lakers this year. They held UPJ to 37 points.
Three seniors ended the game with double figures in scoring including Damon Jones with 15 points, Jean Onana with 14, and Kayode Ajenifuja with 13.
A big contribution to the success of the team this season is the seniors.
Ajenifuja and Jones are exhibiting a strong game. In fact, Ajenifuja is ranked second in the PSAC in field goal percentage, shooting 57.9 percent from the field. Jones is ranked 12th in scoring with an average of 15.2 points per game, according to hurstathletics.com.
“I am very proud. It’s something I really worked hard for. I didn’t play much last season, so achieving this really makes me realize that I’ve came a long way. I am really happy,” Ajenifuja said.
According to Jones, the team chemistry is something vital and impressive.
“We have an awesome chemistry. We spend more time with each other than what we do with our families, so it’s like we’re a family. This team is special. This is best team I have ever played in. This is one of the most talented teams I have seen,” Jones said.
Ajenifuja said the team is feeling confident going into the PSAC Tournament.
“We have a strong defense. We are very well known for our defense. If we can play our game, we will have no problem. If we play together we’ll get the wins,” Ajenifuja said.
The success of the team also comes back to the strong coaching of Gary Manchel. According to the seniors, he has done an amazing job over the years being a leader and putting together a great team.
Next year, with seven seniors gone, it will be time for other players to exhibit their level and step in. According to Jones, they have enough potential to carry along the team.
The Lakers face Gannon University on Wednesday, Feb. 24, at 7:30 p.m. to keep the momentum going as they are preparing for the PSAC tournament that starts on Saturday, Feb. 27.
The Lakers have a bye in the first round and will compete in the quarterfinals on Tuesday, March 1, at the MAC. Time is TBA.