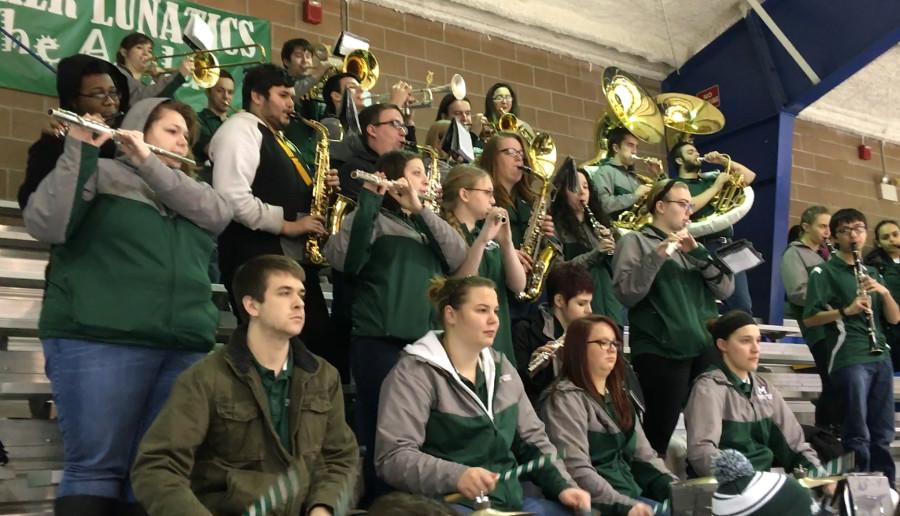 The Mercyhurst University Athletic Band performs at a women’s hockey game. The band will be marching at football games in the fall of 2016.

Starting fall of 2016, the Mercyhurst pep band, which currently plays at athletic events from the stands and sidelines, will take the field marching.

Over the last two years, the band has been working toward the goal of turning into a marching band. They have gone to parades and band exhibitions, specifically ones at Clarion and DuBois. The goal was always to have the band marching by the fall of 2016.

Robert Reid, director of athletic bands, said that he was very excited to have a Mercyhurst Marching Band.

“Nothing about the band is changing, except that we will be marching. The marching band is more of an augmentation of the game day atmosphere,” Reid said.

The marching band will continue to support the teams and alumni. They will still be playing during volleyball, basketball and hockey games. Nothing about the music is changing. There is only the added challenge for the band members to march and play as a unit.

“We have moved the band up to the next level. We are moving forward, but we will still provide the primest game atmosphere,” Reid said.

“Our band also serves as a wonderful medium for major and non-major musicians to continue playing their instrument in a fun and productive setting,” junior Music Therapy major Kevin Timko said.
Now that the band is marching, there is the matter of creating uniforms.

Band camp will continue as it has in the past, taking place a week before school starts in August. Reid encourages anyone who is interested to talk to him about joining. There is also an application at hurstatheltics.com/band.

“We are always open to new students. Recruitment is a 24/7 thing and we have been successful, but I would always like to see more,” Reid said.

Timko will head the band in the fall as the drum major.

“I am extremely thankful for the opportunity to be the group’s first drum major. This position lets me use my passion for music to have a creative input within the band and provides me with a meaningful student leadership experience,” Timko said.

An underclassman student will also take the place of assistant drum major, who will be able to fill Timko’s position after he graduates next year.

“I feel that having a marching band is an important step forward for the university. Live music and visual entertainment through a marching band are a few of the many aspects of a college sports atmosphere,” Timko said.

More information about the marching band will be coming soon.