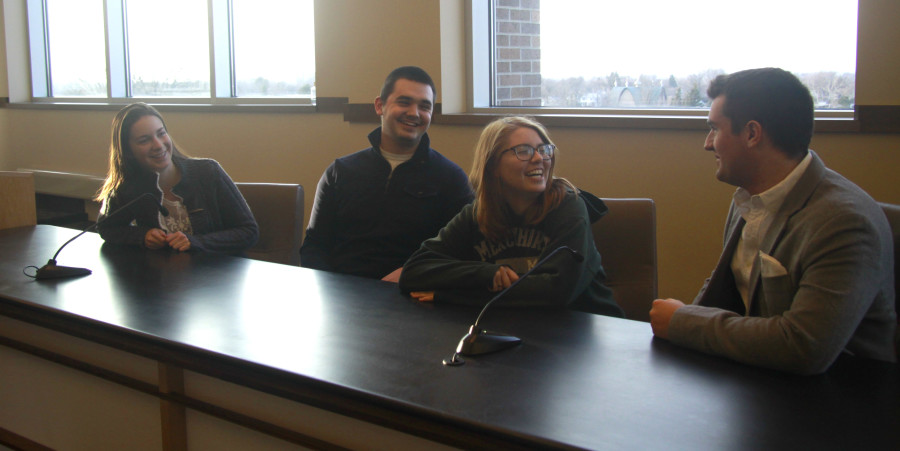 The National Security club seeks to recruit students who are genuinely interested in the field in order to have open discussions on today’s current events. Left to right are: Alison Ockas, Colin Popson, Madeline Riley, Sean Crowley.

The National Security Club on campus has gained attention with its annual paintball event every fall, but throughout the year the club does a lot more as well.

“I think what draws people to the club is a genuine interest in national security events and a desire to keep up on current affairs,” Alison Ockasi, president of the National Security Club said.

National security is a more widely known application of Intelligence studies. However, the field also encompasses many diverse career paths in intelligence.

“Earlier in the year we had some gentlemen from the Air Force come in and talk, and we also had some alums who work for the Cleveland branch of the FBI come in,” Madeline Riley, secretary of the National Security Club said.

Guest speakers helped introduce students to the professional world and give them a broader image into what their futures might look like.

“It allows our students to interact with professionals that we can relate to and get useful information from,” said Collin Popson, National Security Club vice-president.

The club meets several times a month to host events as well as to discuss current national security stories.

In the future, the officers hope for the club to be more collaborative and provide an opportunity for students to present their work and ideas.

“What we want for the future is a club where the students are the primary contributors. We would love to see students host presentations of national security-related topics that they are interested in or have been studying in their classes,” Crowley said.

Student involvement in the club helps develop a greater interest in the topics discussed. Too often students talk about joining a club because they think it will impress employers. Club officials want to make sure students join, because they have a genuine interest in national security.

“We want to make sure that it’s something students actually want to join because they like it, not only because they think it’ll look good on their resumes,” Riley said.

As classes become more involved throughout the semester or Erie winter weather comes into play, it can be difficult to keep up attendance at meetings.

“I think that the meetings are fun, and provide those who go with information that they wouldn’t have otherwise learned. It can also be a good way to meet people and to start networking when we have speakers come in,” Riley said.

There is no doubt that the national security field will retain job security in the coming years. Everyday domestic and world events influence the intelligence field and national security is a large part of that. The club helps keep students up to date on important information that will help prepare them for a career in this demanding field.

“I think what draws a lot of people to our club, and what keeps a lot of people, is the fact that many who come here for Intel want to work in national security, and being part of this club is a good way to keep up with what happens in the world on this level,” Riley said.