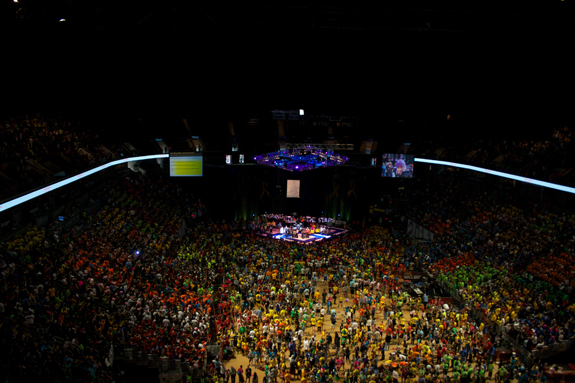 This weekend, Penn State students danced the night (and day) away for THON, the yearlong anticipated dance marathon at the Bryce Jordan Center at University Park.

THON is a student-run philanthropy organization, which began in 1973. The cause: raising funds and awareness for pediatric caner. Since the very first dance marathon, which raised $2,000, THON has raised over $69 million. The benefits go to The Four Diamonds Fund at Penn State Hershey Children’s Hospital.

“I know it sounds cheesy, but now I understand Penn State school spirit,” said Jennifer Slane, chair of THON at Behrend. “It’s something that you can’t entirely know until you’ve been engulfed by it,”

The 707 dancers from each campus were on their feet performing for their cause for 46 hours straight. The physical exhaustion is an expression of the dancer’s support for the cure.

“After 24 hours, we were feeling good,” said senior marketing major Marissa Lanich. “The hardest part was after the first 24. We could feel it, definitely, physically and mentally. I slept about fifteen hours, which was less than I expected.”

At the event, the dancers got to interact with Rylee Dorer, Penn State Behrend’s individual THON child, who is now in remission from T-cell lymphoma.

“The background of my phone was set to Rylee, our THON child,” said senior political science major Amanda Schifko. “And every time I opened my phone it helped me because I knew I was doing it for her. Having them on the floor helped me too. You feel pain, happiness, joy.”

THON is not an event exclusively for the dancers. In order to prepare for the event, students from all of the campuses brave the elements and stand along highways, by malls and by grocery stores, canning in the name of the kids. Also, there have been multiple fundraisers throughout the year which benefit the event. The dancers each had “moralers,” who made signs and cheered for them to keep them motivated through the 46 hours of dancing.

“There was a lot that went into this event: fundraisers, counsel weekends, hours of commitment that required a lot of teamwork to accomplish our goals” said Slane. “This was a monumental moment for THON and something I’ll never forget.”

“I figured it was going to be $8.5 million,” said Schifko. “When they flipped over the nine, I just lost it, grabbed Rylee and started hugging her and grabbed the other dancers and hugged everyone. Our feet didn’t hurt anymore, I wasn’t delusional anymore, it snapped me back into reality that all this time and all this year we were working for 9.5 million dollars.”

The rewards of Slane’s hard work were apparent in her emotional reminisce.

“Being together, crying, rejoicing the fact that our Thon child, Rylee, is in remission. That’s what it was all about in the end, it was great,” said Slane.

Bedbugs have emerged in a few of Gannon’s residence halls, the most recent outbreak occurring last week. Christina Findlay, a freshman physician assistant major, has experienced an outbreak of bedbugs in her dorm room.

“I used to live in Wehrle,” Findlay said. “Two rooms – my friends’ and my room – both got bedbugs.”

As standard university procedure, Findlay and her roommate were moved to another building while their room was treated.

“I’m actually in Freeman Apartments right now for two weeks until they can find us room in Finegan,” Findlay said.

When an outbreak is discovered, Gannon uses a combination of treatments to get rid of the bugs, including both a heat and chemical treatment.

Gary Garnic, associate vice president for campus services, said that Gannon put a lot of research into discovering the best method for eradicating the bedbugs.

“We did a lot of research back in the beginning when these bugs first started showing up,” Garnic said. “We learned that one approach is not necessarily as good as multiple approaches.”

Gannon typically starts the process with a heat treatment. Maintenance Supervisor Josh Eberle said the lethal temperature for bedbugs is 105 degrees Fahrenheit. But Gannon’s maintenance department doesn’t stop there. “We take it up way past that,” Eberle said.

The electric-run heater maintains a steady temperature of 140 degrees for at least four hours, according to Eberle.

“We put sensors throughout the room to monitor the temperatures through the process,” Eberle said. “And that’s all recorded on a computer.”

Garnic said that the heat treatment is the real “secret” to the success of the extermination. He also explained that local exterminators have used Gannon’s methods as a model for their own businesses.

“We did heat treatment before the exterminators actually got into heat treatment,” Garnic said. “They came to study what we were doing in order to get a better understanding of how effective it was.”

Gannon currently has an annual contract with Ehrlich Pest Control. The company works with Gannon’s maintenance staff whenever there is an outbreak on campus.

After the heat treatment is finished, Gannon uses a three-part chemical treatment. The three different chemicals target bedbugs at different stages of life.

“The three chemical treatments treat bedbugs in three different stages of their lives, from active bedbugs to larvae to eggs,” Garnic said. “Any one of those treatments will take care of the bedbug at any stage of its life, if anything’s left alive after the heat treatment.”

But the best defense to any bedbug outbreak involves caution. Bedbugs are most likely to travel on bags and outerwear materials like winter coats. Garnic advised keeping belongings off the floor and preferably hung up.

“When you go to visit somebody, don’t toss your book bag in the corner of the room,” he said.

Garnic also suggested placing coats and purses on hard surfaces instead of carpeted surfaces, such as on a kitchen table instead of a bed or couch.

Bedbugs do not carry any diseases, but still cause a nuisance. Their bites irritate the skin and the extermination process causes students inconvenience.

“It’s not a huge deal,” Findlay said. “You get bit a lot, and that can be annoying. And it’s a hassle having to wash and move everything.”