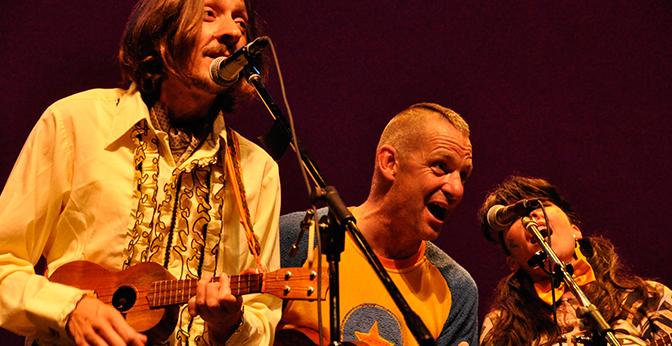 Mercyhurst University welcomes the Wellington International Ukulele Orchestra to the Performing Arts Center on Friday, March 4.  Claimed to be “New Zealand’s hottest music/comedy ensemble,” they are sure to be as equally appealing to music and comedy lovers alike.

The group was co-founded by Bret McKenzie.  He is a Grammy and Oscar winning actor for the New Zealand comedy, Flights of Concord, according to the MIAC biography of the group.

This is no ordinary ukulele band. Although they do play some South Pacific pieces, they specialize in playing more mainstream tunes.  According to the MIAC website, the audience will likely hear songs by Kings of Leon, Justin Timberlake and the Beatles.

As their name suggests, they play ukuleles as their primary instrument.  The ukulele is a tiny guitar with four strings.  It was originally from Hawaii and is known for creating the smooth island sounds you hear while listening to an island relaxation CD.

According to the orchestra in their “Meet the Band” style video on YouTube, as far as they are aware, the ukulele has become more popular than the symphony orchestra.  They suggest that orchestras should get some ukuleles.

Based on the video, the group looks like a bunch of hippies on stage having a great time, chatting and playing the instrument that they love.  If you want to go to a very laid back concert, this one is for you.

Student tickets are either $13 or $16 depending on how far away from the stage the seat is.  Local radio stations who are sponsoring the show have been advertising about the show so tickets will probably sell out fast.  Depending on the availability of tickets the day of, students can purchase any remaining tickets for $5. The show starts at 7:30 p.m.