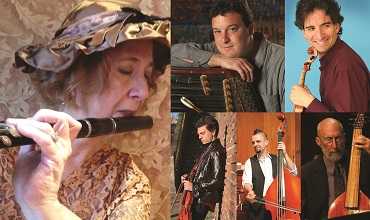 Traditional klezmer flutist Adrianne Greenbaum and the rest of Fleytmuzik.

The Tartan, Baroque & Klezmer, featuring FleytMuzik concert features six musicians and their director who will take you on a journey through musical history.
It is based on the belief that the klezmer or “professional” traveled throughout the land, stealing and adapting musical tunes from Romani.
This musical mystery has since been passed through generations, each time having new pieces added to it. Some of the instruments that will be used during the performance include the classic flute, fiddle and bass.
There will also be various instruments such as the cimbalom and gamba, which are both large, string instruments. The music will include music from the klezmer tradition—an Eastern European style of Jewish folk music, with influences as wide ranging as Arabic and Scottish music.
The concert will also include music from standard Baroque period composers.
The program is described as “Interwoven fabrics of Jewish itinerant musicians, from Slovakia to Scotland and beyond.”
The concert will take place for free in Walker Recital Hall on Monday, March 7, at 8 p.m.
Albert Glinsky, Ph.D., also stated that “we are thrilled to be presenting FleytMuzik, an ensemble of high level musicians, who will be bringing a unique set of instruments, and a rarely heard style of music, to our campus.”
The concert should provide a fascinating glimpse into the music of another time and another culture.”
The masterclass following the performance is a coaching session by a professional musician working with a student musician, which can be observed by an audience.
FleytMusik, will coach D’Angelo Department of Music students in learning some new tunes in the Klezmer tradition and performing them with FleytMuzik live.
The musicians from Tartan, Baroque and Klezmer will be in the Walker Recital Hall to give a lesson on how some of the instruments work, some of their practice routines and any other questions the audience may want to know related to their repertoire.
All are welcome, so come observe this masterclass on Tuesday, March 8, from 2 p.m. to 3 p.m. This event is free and open to the public.