No.3 ranking holds for Lakers wrestling 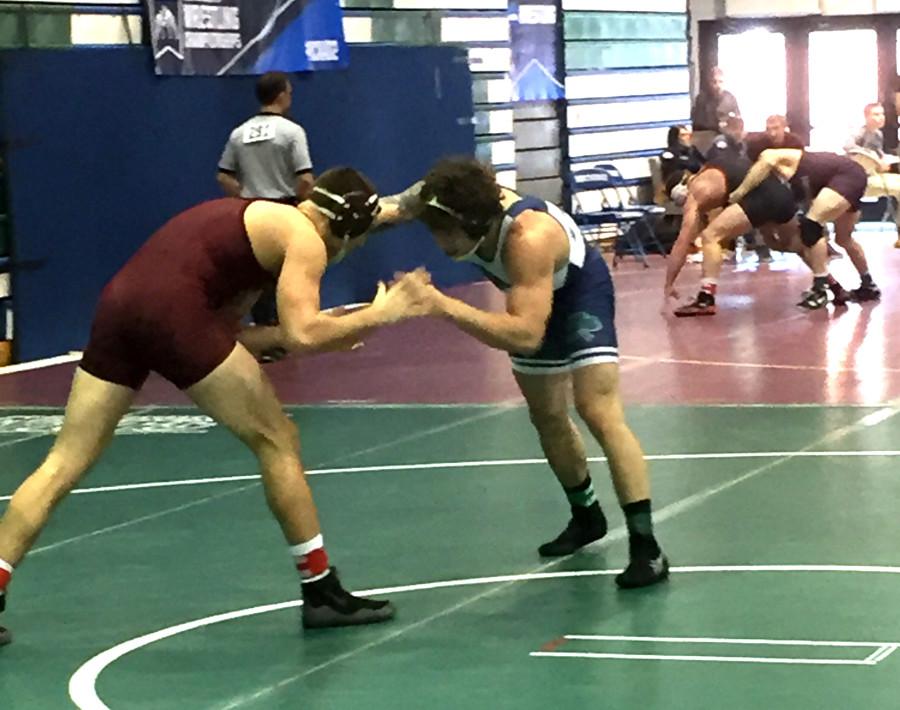 Redshirt junior Angelo Bortoluzzi (above) took sixth place in the Super Region I Tournament going 3 for 6 on the day.

Mercyhurst wrestling sent four ranked wrestlers into the Super Region I tournament over the weekend of Feb. 26 and 27, and came out with five national qualifiers. The Lakers entered the tournament ranked third in the region and in fitting fashion, finished third.

The Mizia brothers won their championship matches back to back, both upsetting their foes from the University of Pittsburgh at Johnstown (UPJ) who had beaten the brothers in their dual meet two weeks ago.

August Mizia was ranked No. 1 seed in his weight class. His semi final and championship matches were won by decision over the No. 4 and No. 2 seeds.

Joining the Mizias atop the podium for the Lakers was heavyweight Andy Welton who won every match by pin or major decision. Welton, who was ranked the No. 3 seed faced Ryan Appleby, the No. 4 seed, of Kutztown University in the finals and controlled the match, cruising to a 10-1 major decision victory.

Welton is a junior making his third national appearance, having placed second in the region as a true freshman and finishing fifth in the nation last year.

Finishing second for the Lakers and rounding out the national qualifiers are 125 pound redshirt junior Willie Bohince and 149-pound redshirt senior Jeremy Landowski. Bohince fell in the finals to UPJ opponent Evan Link in an 11-2 major decision loss, giving Bohince his second loss of the season.

Landowski, who has battled back pain this season, forfeited his championship match, already having clinched a berth to nationals by making it to the championship round.

The top performer not moving on to nationals for the Lakers was 133-pound wrestler, sophomore Kevin Kinyua. Kinyua finished 2-2 in his first Super Region I appearance, missing out on qualifying for nationals by one match.

“When you watch him out here, he never quits. In wrestling you have to keep moving and for seven minutes he never quits,” Mercyhurst Athletic Director Joe Kimball said.

As a team, Mercyhurst placed third out of 15 teams at the tournament. Taking first place was No. 1 ranked UPJ 155.5 points followed by Notre Dame of Ohio with 143 points.

None of the five Laker wrestlers moving on are strangers to the level of competition they will face in the NCAA Division II National Championships. This year will be the third appearance in the tournament for all of the qualifiers.

Returning technical fall award winner and current leader in the nation with eight tech falls this season, Francis Mizia, has great confidence in his team, his older brother and his preparation going forward.

“We’ve got a good shot at making a run for the national title” said Mizia. “I trust in my training, I trust my coaches, my teammates, I trust myself. I know everything I’m doing is the right thing to do to win a nation title. I just have to go out and do it.”

Francis’ confidence in his older brother August shone in his belief that “he is the best wrestler in the country. He can take that how he wants. I already know it, the team already knows it.”

The Lakers will wrestle in Sioux Falls, South Dakota, March 11 and 12 for the National Championship.