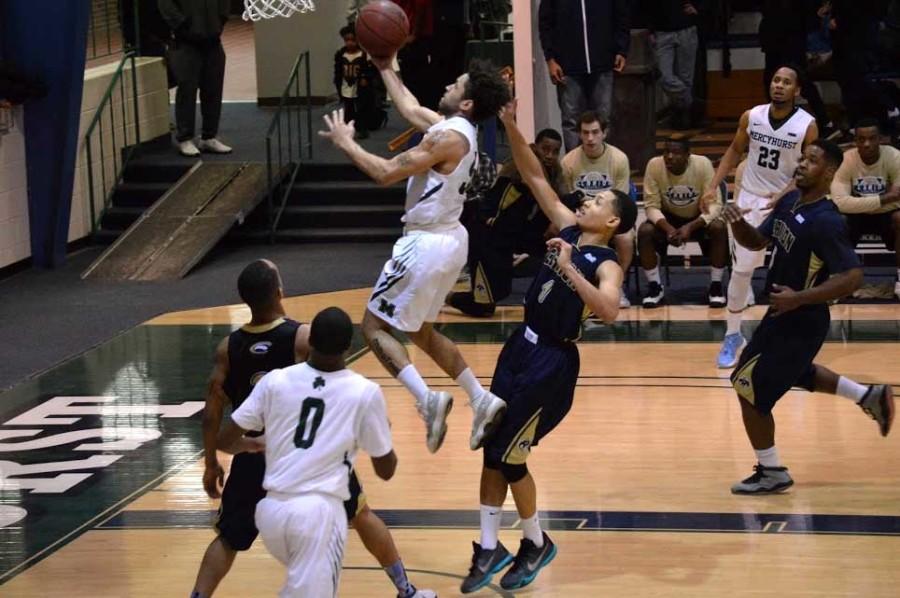 Junior H’ian Hale shoots a layup in Mercyhurst’s 84-68 win over Clarion in the quarterfinals game on Tuesday, March 1. With the win the Lakers advance to the PSAC semifinals.

Mercyhurst led at the half 51-26 and Clarion couldn’t close the gap throughout the rest of the game despite out scoring the Lakers, 42-33, in the second half.

Kayode Ajenifuja led the team in scoring with 23 points followed by Jean Onana with 18. Sean Beis led in rebounds with 10.

This is the second year in a row that Mercyhurst hosted the quarterfinal game.

The last time Mercyhurst and Clarion met was in February, Clarion came away victorious with a score of 67-62. Earlier in the season in December, the Lakers defeated Clarion 82-69. Even though Mercyhurst split the season series with Clarion, coming into this game, the loss was still fresh in the team’s mind.

“We have to get a little bit of revenge back tomorrow so that is the motivation for us. Not to mention we want to win a conference championship,” senior guard Gerrae Williams said.

Last year in the quarterfinals, the Lakers expected to win, especially after sweeping the season series against IUP, but IUP came away victorious. This year the approach will be a little different.

“This year the team is more focused. Having 11 players returning and six of them being seniors, I feel as though we are more prepared. Experience is the best teacher. Last year we were in the same predicament and we lost, so this year we know what we have to do to capitalize and to get a win,” senior guard Damon Jones said.

The Lakers defense is one element that helped the Lakers come out on top.

“Being ranked first in the conference and first in the country is a great accomplishment for this year’s team. We take pride in our defense and playing for a coach like Gary Manchel. Defense is a major key,” Jones said.

This is the seventh consecutive seasons Mercyhurst played in the PSAC Tournament. Of those seven, they have reached the quarterfinals six times.

The semifinals will be held on Saturday, March 5. Time and place are TBA.