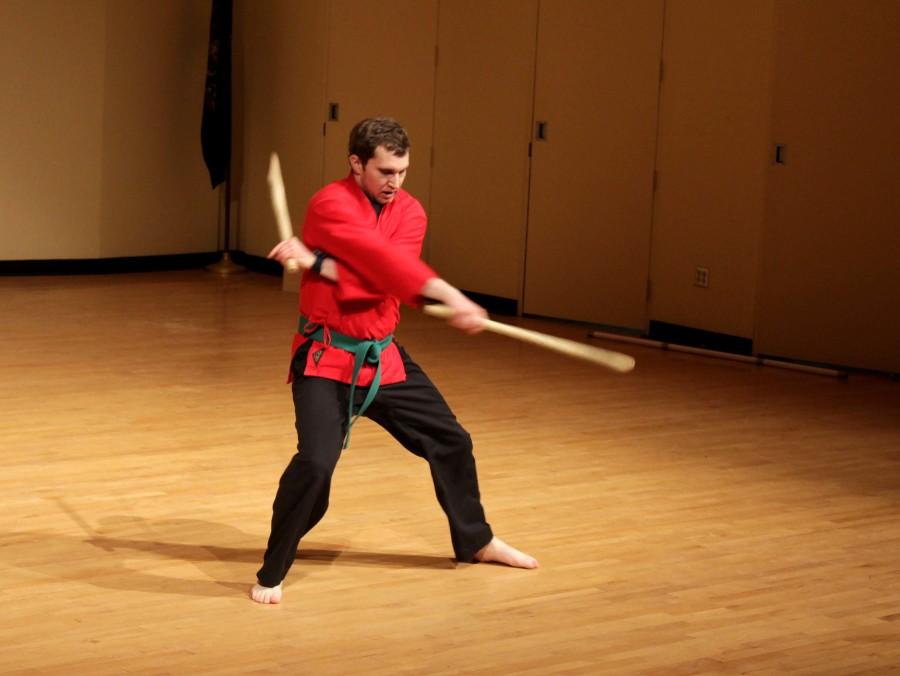 Jacob Podyman performs a martial arts’ “kata” in the Walker Recital Hall. Through the martial arts club, Podyma hopes to teach students to become a better version of themselves.

After about four years of inactivity, the martial arts club is making a comeback to Mercyhurst.

In 2012, the physical fitness and martial arts program instructor left Mercyhurst, leaving Martial Arts club members scrambling to fill in the void. For the next two years, the group attempted to get the club going to no avail.  Until this year, when senior finance major and new club president, Jacob Podyma and his fellow officers got together and formed the Mercyhurst Martial Arts Strength Conditioning and Fitness Club.

“Without my fellow officers, my VP and my secretary this truly would not have been possible,” Podyma said.

Podyma took Daliang Wang, Ph.D., Asian Cultures through Martial Arts class this past J-term, from which he  found the inspiration to give the club a fresh start this spring term.  The new focus of the club will be to educate students on the discipline, while avoiding any form of physical contact.

Danudoro has trained in the Muay Thai technique for six years. He believes his experiences as a martial artist has been beneficial to his life.

“It’s impacted me positively in so many ways, and I’m blessed to have picked it up when I did,” Danudoro said.

“Physically, it has kept me healthy and fit, but aside from the physical aspect of it, I think the most important part is helping me out in a mental and spiritual aspect. Fear and doubt is a big part of this sport, so it helped me become a more confident and disciplined person,” said Danudoro

“I could’ve been in a much worse situation if it wasn’t for combat sport. It has become my moral compass. Respect, humility, temperance; I’ve learned all of that through my martial art experience.”

Both students agree that what martial arts does for body is worth the effort.

Podyma looks back to his early days as a student of martial arts to reflect on how much martial arts has helped him grow as a person.

“The motto for the dojo I went to was ‘Quietness and Confidence shall be my strength.’ And I think that’s what martial arts, to me, is really all about. I draw strength from knowing that even if you aren’t the biggest or strongest, you can still be strong and powerful,” Podyma said.

The club aims to live by their mission statement.

“The Mercyhurst Martial Arts Strength Conditioning, Fitness Club aim is to incorporate the mind, body and soul into one with the aim to improve the health of students  through martial arts.  In addition, the club serves to educate students on various Martial Art styles,” Podyma said.

At the end of the year, Podyma wants everyone in the club to present on what they learned throughout the semester.

“At the end of the semester we plan to have a demonstration on what the club has learned as far as the physical movements, also called katas, along with the cultures, philosophies and languages surrounding each art that we will have studied,” Podyma said.

The club meets Wednesday nights at 7 p.m. in the second floor of the Student Union.