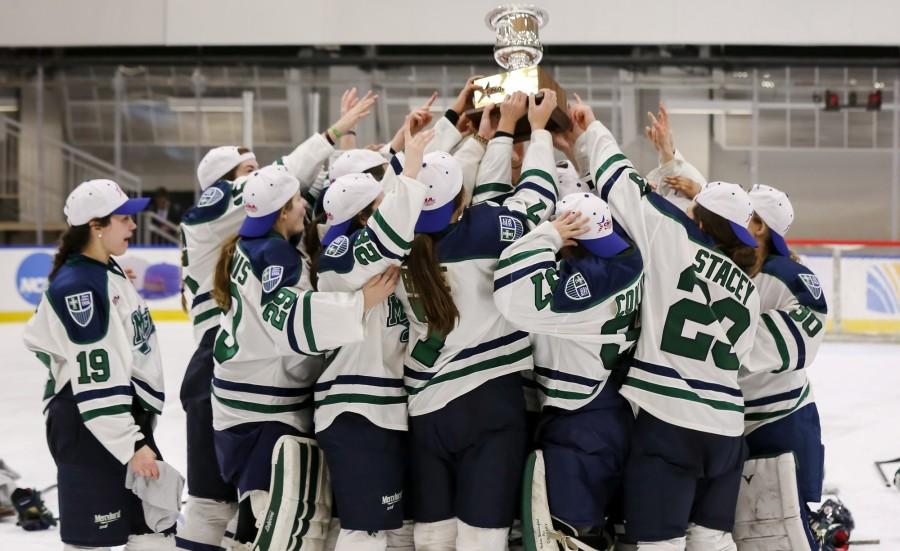 The Mercyhurst women’s hockey team celebrates after winning the CHA championship game, 4-3, in overtime over Syracuse.

“You can’t buy the feeling of winning a championship,” said Head Coach Michael Sisti. “You have to work hard all season and earn it and I’m glad that our players are able to experience that.”

During the CHA America Semifinals the Lakers power play lifted them over Robert Morris University.

Senior Emily Janiga started off the scoring with a power play goal from freshman Rachael Smith and Sarah Hine at 15:53 in the first period.

Robert Morris tied the game at one at 12:11 in the second period, but the Lakers came back with another power play goal one minute and 43 seconds later.

Sophomore Brooke Hartwick defeated Robert Morris’ goaltender to put the Lakers back up, 2-1. The assists on the go ahead goal went to Smith and Janiga.

Senior Jenna Dingeldein scored the Laker’s third power play goal of the game to put them up by two at 8:23 in the third period. Juniors Megan Whiddon and Paige Horton picked up the assists on the goal.

Robert Morris came back with a power play goal of their own, but it was not enough.

Laker senior Hannah Bale scored the empty netter to give the Lakers their 4-2 win over Robert Morris and advance to the championship game.

“Our power play is a huge part of the game and has been getting better all season, but we have not always gotten the results that we wanted from it,” said Sisti. “We put a lot of time into it and it was a huge turning point to our success this past weekend. We focused on it, bared down and capitalized on our chances.”

During the CHA Finals against Syracuse, the Lakers scored twice on the power play to fuel the rest of the game.

Syracuse struck first in the second period, but the Lakers came back with two quick goals of their own a few minutes later. Both goals came on the power play.

Dingeldein found the back of the net at 18:46 to tie the game at one. The tying goal was assisted by Horton and Janiga.

Twenty-nine seconds later, the Lakers received another power play chance and capitalized on it, to take their first lead of the game. The go-ahead goal was scored by Hine and assisted by Dingeldein and Horton.

Smith scored just 46 seconds into the third period to give the Lakers a 3-1 lead.

Syracuse picked up another goal at 17:08 in the third period and then scored again with 30 seconds left to tie the game at three and send it into overtime.

“It was disappointing when they came back to tie the game, but that’s where character comes in,” said Sisti. “Despite the frustration our girls kept playing and responded well to the challenge.”

Dingeldein picked up her second goal of the game, when she beat Syracuse’s goaltender to win the game for the Lakers and give them the Championship title. The game-winning goal was assisted by Janiga and Smith.

Syracuse outshot Mercyhurst, 34-33, and McDonnell made 31 saves between the pipes, including six during overtime.

“The challenge now is to not let the season end next weekend,” said Sisti. “We will be underdogs, so we will have to work hard to get the berth to the Frozen Four.”

The Lakers head to Wisconsin to take on the No. 2 ranked Badgers in the NCAA quarterfinals on Saturday, March 12. This marks the ninth time the Lakers and the Badgers have played against each other.