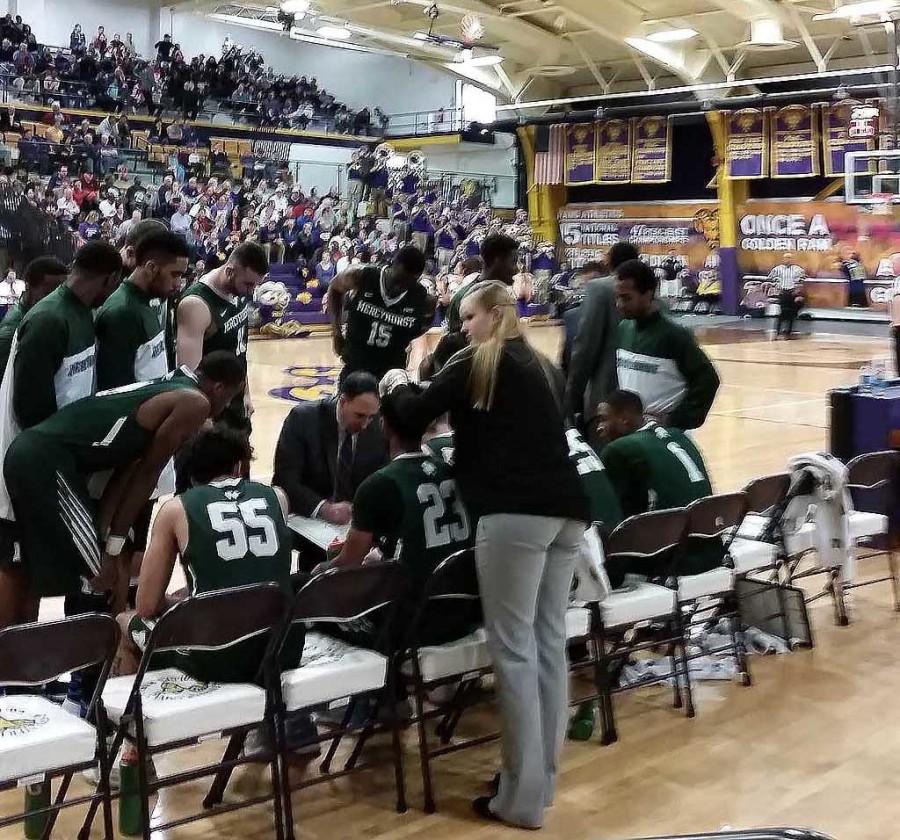 Men’s basketball won the PSAC Championship 70-67 over West Chester University for the first time in program history. The Lakers face No. 4 ranked Wheeling Jesuit in the NCAA Tournament.

The Mercyhurst University men’s basketball team made program history over the weekend of March 4 and 5 , defeating West Chester University, 70-67, in an intense PSAC Championship game.

To pull this off, they first had to defeat the Shippensburg Raiders who performed a solid game in the semifinals.

Mercyhurst scored 31 points in the first half, trailing by six at the half. The Lakers managed to overcome the Raiders’ defense by scoring 48 points in the second.

Leading the Lakers comeback was redshirt senior Gerrae Williams, who shot four-of-six 3 point shots. Williams led the scoring for the Lakers with 20 points followed by senior Kayode Ajenifuja with 17.

The Lakers had a harsh first half trailing by as many as 11 points and the Golden Rams took a 7-point lead at the half. Nonetheless, Mercyhurst stood up to them in the second half which led to their 3-point win.

During the second half, senior Jean Onana tied the game for the Lakers at 50. Onana had seven unanswered points giving the Lakers their first lead since the beginning of the game.

The clock was winding down as the lead continued to switch between the Lakers and the Rams. In the last 37 seconds of the game the Lakers made two-of-four free throws ending the game with a 3-point advantage.

Onana led the scoring for the Lakers with 19 points, Ajenifuja finished the game with 14 points followed by senior Damon Jones with 13 and Williams with 11.

“The seniors played really well. It was a collective effort. From the bench to the coach to the assistance. Everybody played hard,” junior Justin Senou said. He later stated that the key of their winning season is the team’s defense.

In fact, Jones and Ajenifuja were chosen for the All-PSAC Western Division Second Team before the semi finals game. With 471 and 388 points respectively, they both average more than 13 points per games, so far.

Senou commented that everyone feels confident in the team and that he knows his teammates play to win. The seniors said that it is even more special since it is their last season as college basketball players.

The Lakers face No. 4 Wheeling Jesuit University Saturday, March 12, for the first round of the NCAA Tournament. The second round is Sunday against Kutztown or West Chester.