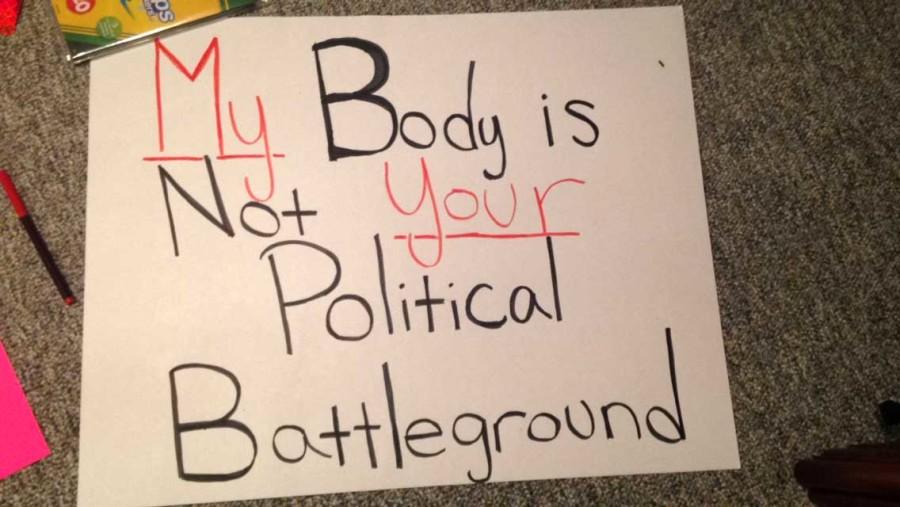 MEOW traveled to D.C. to rally during the Whole Women’s Health v. Hellerstedt case. This poster was featured in USA Today’s website.

The Mercyhurst Equality of Women club, traveled to Washington D.C. to support the women’s rights case being heard by the Supreme Court.

On March 2,  nine members of the club were present at the rally supporting women’s abortion rights during the Whole Women’s Health v. Hellerstedt case. The club’s goal was to stand in support of women’s rights regardless of genders. The trip was organized by club officers senior Archaeology major Brianna Flynn and senior Psychology major Danielle Dros.

“This is supposed to be one of the most historical cases since Roe v. Wade, so that is pretty cool,” Flynn said.

The controversy was initiated by a Texas law called HB2, which requires women’s health and abortion clinics to upgrade their facilities to very strict standards and have admitting privileges to local hospitals. After its implementation in 2013, only 18 of the approximately 40 original clinics remain. The law threatens to close more of Texas’ women clinics.

The case was initiated by Whole Woman’s Health, a women’s health clinic that has its flagship facility in Texas and seven other facilities nationwide.

According to their website, they are a private feminist organization that focuses on providing safe gynecological and abortion care to women in need.  The closure of various local clinics has forced patients to travel over 300 miles in order to find the care they are looking for.

MEOW got together the evening before the rally to make posters. One of the girls who went made a sign that read “My body is not your political battleground.”

The club member, along with her poster, made the front and center of a picture taken and posted by USA Today on their article covering the case. The majority of the group said that they had never been to a rally or even to Washington D.C. before.

“Opposition was there, which was kind of awkward and scary,” said Dros, “But it was really awesome that the picture was posted on the USA Today website.”

The members that went included seven women, one a-gender and a male. Johnny DiPrinzio looked forward to this trip in order to support women’s rights as a man.

“It is especially important for men to step up for women because men are the developers of the patriarchy,” said DiPrinzio.

“We have to give women voices and give them these rights that we took away.”

The group had to adhere to a peaceful non-engagement agreement created by Planned Parenthood in order to attend the rally at the Supreme Court steps. No decision was made on the case on March 2 and the Supreme Court is still strongly divided.

“We are making so much forward progress with human rights that it is kind of scary that this case is going on,” said Dros. “Women’s rights are human rights.”

According to the Wall Street Journal, ever since this issue was brought to the Supreme Court, a Louisiana abortion law has been blocked until a decision is made on the  abortion law in Texas.