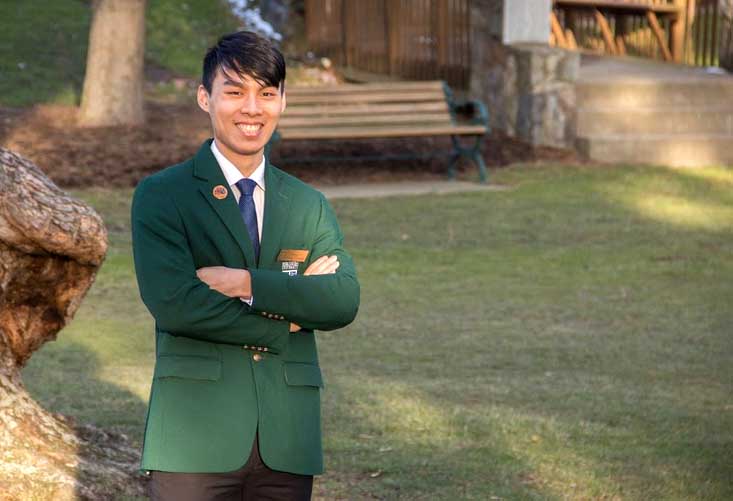 Phong Vu credits his success to the values taught to him by his mother. He considers this achievement as one of the proudest moments of his life.

For his perseverance and hard work, Phong Vu was recognized as ambassador of the year.

Each year, the admission office honors a senior ambassador to recognize their distinguished work in the ambassadors club. The person is chosen based on their past as an ambassador, including the amount of work they do, their work ethic and whether they were willing to go beyond their responsibilities as an ambassador to provide outstanding services not only to the admissions office, but to the guests touring the school.

This year, senior Finance and Accounting major Phong Vu was chosen to receive the award during the Ambassador Spring Tea ceremony. The ceremony is held every year to bid farewell to all senior ambassadors and welcome all the incoming freshmen ambassadors.

“It was one of the proudest moments of my life. You are standing there and basically 300 to 400 people were clapping and cheering on you,” Vu said.

Vu stood out over 26 other senior ambassadors by going the extra mile. He did twice the amount of work required and helped out in the admissions office whenever he had a chance.

“Ambassadors usually need to complete 30 events, which includes tours and other events from the university. I did twice the amount of event requirements. Whenever there is something they needed help with, I am always there,” said Vu.

“And I also got really good reviews because I give good tours.”

The winner is chosen by Campus Visit Coordinator, Sloan Spinks who meets with different ambassadors throughout the week and through their feedback and conversations gets an idea of how ambassadors are like. She also receives reviews from other ambassadors.

“I kind of saw it coming. I mean, I worked really hard. I wanted it since the beginning of the school year. It was tough, but I got it,” Vu said.

For his sister and fellow ambassador, Phuong Vu, seeing her brother receive the award was not a surprise.

“He works really hard as an ambassador. He not only finished his assigned tours and events, but was also willing to take on more and help out other ambassadors when needed. And he did not only give tours for the sake of it, but instead truly represented the school and tried his best to match what the school has to offer with the interests of the prospective students,” said Phuong Vu.

“There were a few times that I walked past his tour and I could tell the students and their family were really enjoying it.”

Vu attributes his dedication and perseverance to the lessons he learned from his mother.

“My mom always taught me that a person is defined by his or her actions. One thing my mom is really proud is that I am hard-working and I build my character from that,” said Vu.

During the ceremony, graduating senior ambassadors received a whiskey cup with a bottle of wine. Aside from his title, Vu received a Mercyhurst sweatshirt.