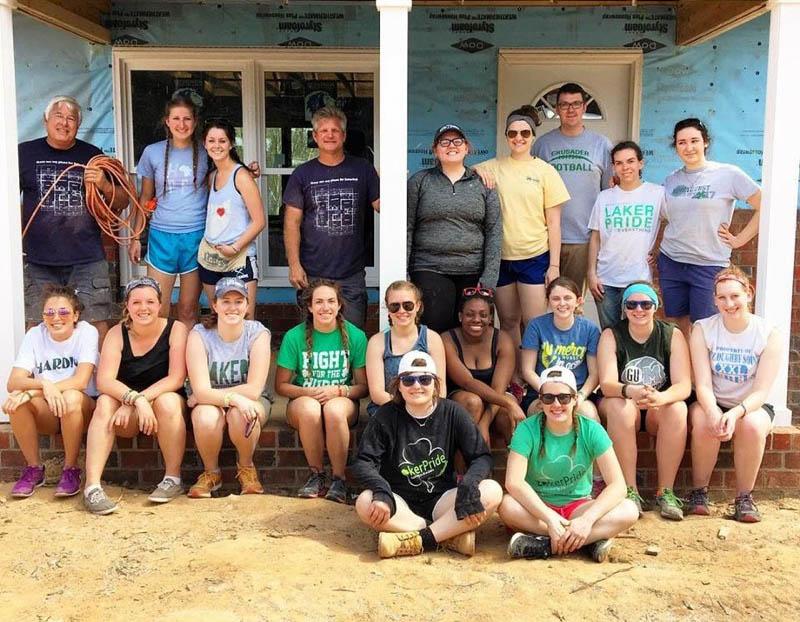 These are the students that went on Monroe, N.C. Habitat trip.

Members of the Mercyhurst Habitat for Humanity club, or “habitators” as they affectionately refer to themselves, along with other students, spent their spring break in Monroe, N. C., and Port Huron, Michigan.
A group of 17 students and two staff members went to Monroe, N.C. and worked on three projects. The Union-Anson County Habitat community joined them on the four-day trip, where they demolished a house, helped a retired veteran clean his yard and built two new homes.
The week began with demolition. The city wanted a house torn down and welcomed Habitat to any of the materials that they could salvage.
“The first two days were demolition based,” Kelsey Davies, Mercyhurst Habitat for Humanity club president, who attended the trip said.
The demolition involved a lot of work.
“We did a lot of different things, including: taking the shingles off of the roof, knocking out the chimney, removing doors and windows, removing trim woodwork, knocking out walls and removing carpet,” said Davies.
The salvaged items from the house were taken to the ReStore center.
“Habitat re-sells items at a lower price for people who are building or remodeling houses at a cheaper price,” said Davies.
This also helps Habitat to raise the money it uses to build houses.
The afternoon of the second day was spent working at a World War Two veteran’s home where the group worked with him to clean up scrap metal from around his property. For many of the students it was an eye opening experience to work one on one with the community.
“This was a pretty unique project that Habitat did. It is not a common thing for them to help out like that but it was a great experience for us,” Davies said.
On days three and four, they worked on a build site, working on two houses next door to each other. At the two homes, groups of students worked to insulate the houses and put up siding.
“It really is a great experience going on these trips because you never know in what way you will be helping the community and it is such a rewarding feeling knowing that you are helping to make a difference in somebody’s life,” said Davies.
While the group did not finish the houses, other Habitat members will come to take Mercyhurst’s place as the work is ongoing.
“We worked on two houses that had already been started by other groups but we did finish different parts of the houses. Other groups were coming after us to finish up the houses,” said Bridget Jacob, an Elementary/Special Education major that went on the trip.
Habitat for Humanity is a nonprofit organization that is based on the idea that everyone should have a decent, safe and affordable place to live. The group that went on the trip felt they accomplished just that.
“It is rewarding in many ways. The people you meet, the friendships you build, the work you accomplish and all of the things you learn, it is a wonderful way to get to know yourself and see God’s work being done,” said Davies.
The students who went on the Habitat trip feel it is a worthy cause.
“Overall it was a great experience. Everyone on the trip really bonded and enjoyed working for such a great cause,” said Becky Harms, a Business Competitive Intelligence major who went to Monroe.