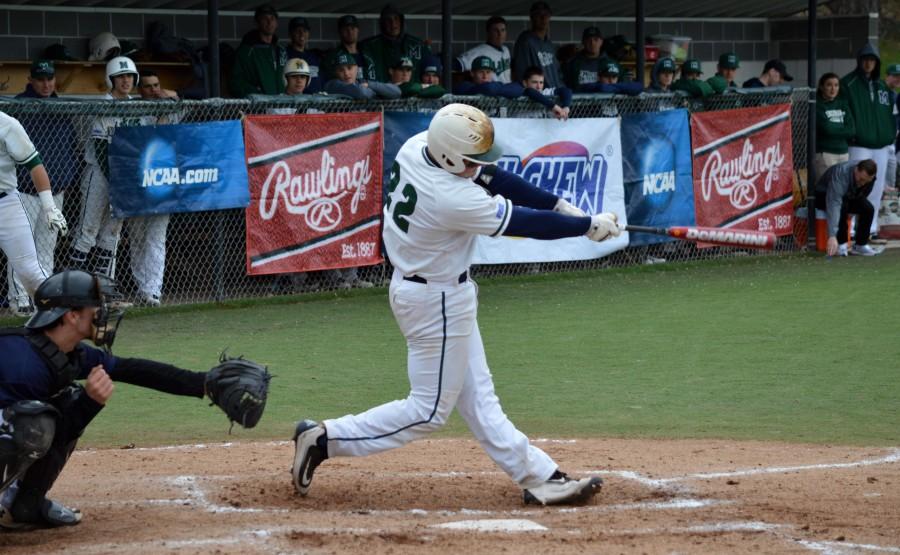 Infield junior Cameron Balego (22), pictured above, went 2-3 and scored one run against Clarion in the Lakers 8-4 win in the second game of a double header on April 1.

The Mercyhurst baseball team added four wins over Clarion University last weekend, extending their win streak to nine. The sweep is the second in a row for the Lakers having swept Slippery Rock a week ago.

Scoring was certainly not an issue for the team, posting 36 runs on the weekend outscoring Clarion 36-8. In the fourth game of the series, sophomore pitcher Matthew Minnick threw a complete game shutout moving him to 3-0 as a starter, earning him PSAC Western Division Pitcher of the Week.

On their nine game win streak, the Lakers have outscored their opponents 86-19.

Game one, on April 1, was the closest with the Lakers only posting three runs, but that would be enough. Redshirt junior pitcher Colin McKee improved to 5-1 on the season holding Clarion to two hits in a seven inning shutout.

Although the beginning of game 2 started out slow, the bats were much more alive for Mercyhurst starting in the fifth inning. The Lakers took a 3-0 lead after the bottom of the fifth. Clarion answered in the sixth inning scoring three runs to tie the game. But Mercyhurst came alive in the bottom of the sixth scoring five runs while Clarion scored just one more run in the seventh inning giving the lakers an 8-4 win.

The pitching staff has not lost a game when holding their opponents to four runs or less all season. The four wins improved Mercyhurst to a 10-1 record at home, with their only loss against Seton Hill on March 18, where the Lakers split the doubleheader with the Griffins.

In game three the Lakers lit up the scoreboard, posting 15 runs on 14 hits. Morrison opened things up in the first inning with a two-run double and would do so again in the fifth, tying his season high RBIs in a game with four. Senior Marc DiLeo and freshman Matthew Schneider joined Morrison in the multiple RBI game with two apiece. Redshirt senior Joe Gnacinski gave up no runs in five innings earning the win and improving to 4-1 on the season.

“We were confident before but now we are starting to put offensive and defensive efforts together and this makes the atmosphere of the team feel unstoppable. I obviously have expectations to get back to where we were last year in Cary, N.C. where the Division II National Championship is,” said Morrison.

“No matter how badly I want to just snap my figures and be back there this year, as a team we have to take it one game at a time, because like every year there are very good teams in our division and region.”

Game four was the biggest margin of victory on the weekend for the Lakers, scoring 10 runs on 10 hits, and a complete game, one hit shutout by Minnick. Minnick had a season high 11 strikeouts and faced only 23 batters through seven innings earning him the PSAC Western Division Pitcher of the Week award.

Continuing with the wins, the Lakers took on Lake Erie College by storm defeating them 14-0 on Tuesday, April 5. Pitching for Mercyhurst was freshman right-handed pitcher Chris Vallimont.

The Lakers started with a strong first inning, scoring five runs. With Cox on third after stealing and Gonzalez on first after a walk, Morrison singled through the left side, scoring Cox.

With Morrison on second base and Balego on first, DiNardo hit a three-run home run to give the Lakers a solid 5-0 lead.

“As a team we are always pumped. We played really good baseball today and were swinging well,” Gonzalez said.

Mercyhurst kept the runs coming in the second inning. Collin Fantasky stole third and then scored on a error by the catcher. The next run was scored by Morrison on an RBI double to left center by Elliot.

The Lakers continued to hold the Storm to no runs while Merchurst kept racking them up.

Cox scored in the third inning from an RBI off the bat of Gonzalez. In the fourth inning, Fantasky reached first on an error in right field allowing Latona and Balego to score giving the Lakers a 10-0 advantage.

The Lakers had another multiple run in the fourth inning. Gonzalez doubled to left center, landing him on second, followed by an RBI double by Elliot to bring home Gonzalez. Then for his second of the day, another three-run home run by DiNardo to put the Lakers up 14-0.

The sixth and seventh innings were quiet from the Lakers, only having one hit in each inning. In the eighth, the Lakers had three hits but could not bring in a run.

The top of the ninth inning ended with senior pitcher Ben Nolan striking out three out of four batters securing the Laker’s 14-0 win.

“14-0 win is always great but we have to keep playing small ball and focus on every game,” Gonzalez said.

Vallimont got the win for the Lakers. Through six innings he allowed just two hits, two walks and threw four strikeouts. Senior RHP Matt Jaskolka entered the game in the seventh for Vallimont and allowed no hits.

The Lakers’ (21-8) next league games will be for control of first place in the PSAC West against crosstown rival the Gannon Golden Knights (21-8) this coming weekend, March 9 and 10.

“As a team we all are excited and hyped about this series against Gannon, it is a grear rival and we are looking forward to win the series one game at a time,” Gonzalez said.