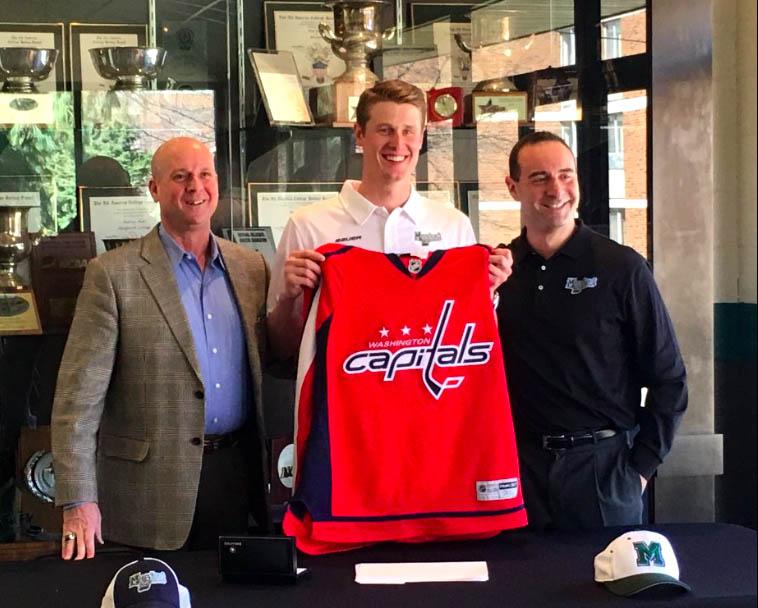 “It means the world, I don’t have any words to describe it,” said Carlson. “It’s one of those deals, that you can’t resist.”

Carlson’s two-way contract is a NHL component. If he plays in the NHL, terms are at a certain amount and if he plays in the American Hockey League [AHL], he gets the same amount of money, along with a signing bonus.

Carlson’s recruiting process started early on in the season. He was invited to join the Washington Capitals development camp during Christmas break, where he was told to get an agent. As the recruiting process continued, the Capitals never lost interest, ultimately leading to his signing this week.

“The road was bumpy, but as hard as it was, I had an absolute blast,” Carlson said.

Carlson, a native of Edina, Minn., is the second player in three years and sixth player overall in Mercyhurst hockey program history to sign an NHL contract. He is the second to do so with the Washington Capitals; alumni Jamie Hunt ‘06 also signed before he was a senior and became the first Laker player to play an NHL game.

Carlson becomes the first goaltender and first freshman in program history to sign with an NHL organization. He is the second player to leave Mercyhurst early.

“It’s been an unreal experience here at Mercyhurst and I wouldn’t change it for anything,” Carlson said.

Carlson recorded his first collegiate win during his first start in net for the Lakers on Oct. 24 against Army. He stopped 33 shots during the Lakers’ 5-2 win. He posted a career high of 50 saves during Mercyhurst’s 2-2 tie at Robert Morris on Jan. 22.

“This speaks volume for Adam Carlson, the kind of player he is and the kind of person he is,” said Head Coach Rick Gotkin. “Obviously, he has great potential. They [the Capitals] are excited, he’s excited and we’re very excited.”

Carlson will be joining the AHL Hershey Bears immediately on an amateur tryout agreement.