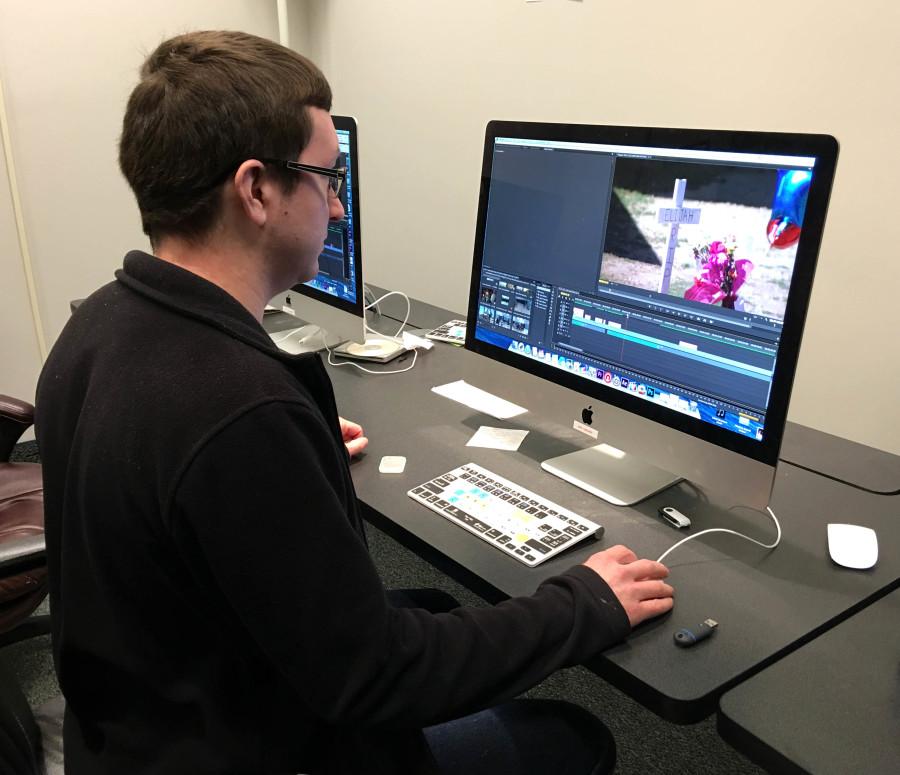 Brent Clapper, senior Communication major working on Let it Begin with Me documentary

You are love and you are loved. This is the message that came from the premier of Let It Begin With Me: Putting an End to Youth Violence in Erie, a student-made documentary produced by the senior Social Work class of 2016.
The documentary was a year-long project that began in September and made its premier at Collegiate Academy on Saturday, April 2. The Social Work students received help from the Communication Department.
The hour-long film documents the stories of three teens who were victims of homicides during the summer of 2015. The family and friends of victims were interviewed throughout the school year.
“This film is recognizing that real people and real families are having their worlds turned upside down due to this violence in Erie. People will be made aware of the impact it does not only have on the families but on the community as a whole” senior Social Work major Nikki Charboneau said.
Approximately 400 people attended the premier, according to Michelle Ahrens, who worked on the project.
“I think it went amazing. We really came together as a group on that day to get everything done that needed to be done,” Riley Norton said. Norton, served as a speaker on behalf of the group at the premier. “I couldn’t have asked for it to go any better,” Norton said.
Ahrens said she could see the bond of community at the event.
“I think it was really cool to see the community completely come together. Seeing the moms of victims there supporting each other, seeing the kids afterwards that we interviewed, some of the teenagers, we were talking to them and they pulled us into this giant group hug,” Ahrens said.
After the film ended Pastor Curtis Jones, a member of the Erie community, gave a brief blessing.
“He was great because he touched on something that everyone in the auditorium needed to hear which was about love,” said Norton. “It was something so unifying and so to the core of our documentary, that I may not know the person personally, but I love you. If you like in Millcreek, if you live in Harborcreek, we love each other.”
The Social Work class plans to screen the documentary again at Mercyhurst before the school year ends. The time and date are to be determined.
The Social work majors also plan to distribute a survey about youth violence to fellow Mercyhurst students, according to Norton.
“We want more understanding from the Mercyhurst crew what they know about youth violence because we are on a little castle on the hill, so we want to know what other people know about this issue,” Norton said.
The students involved with the project are: Eva Solomon, Adrian Washington, Kerry Dieter-Roward, Denise Hager, Sarah Klobuchar, Riley Norton, Maggie Switzer, Michelle Ahrens, Lindsay Matczak and Danielle Dros. The Social Work majors also have received help from the Communications Department, especially the technical assistance of senior Communication major Brent Clapper.