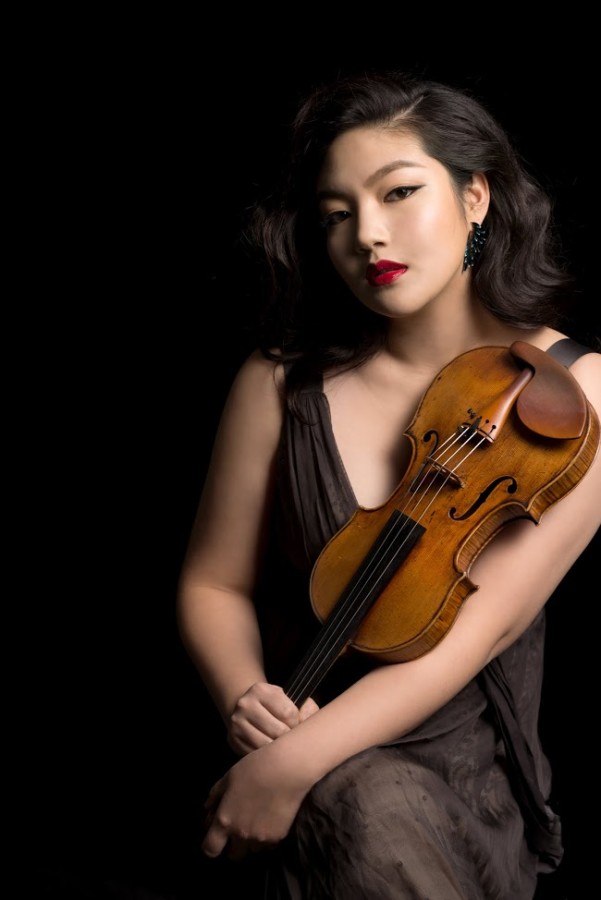 Violinist Jinjoo Cho will be performing a concert in Walker Recital Hall.

The 2015-2016 season of the Roche Visiting Artist Series concludes with the Gold Medalist of the 2014 Ninth Quadrennial International Violin Competition of Indianapolis, Jinjoo Cho.
She will be performing a concert on Monday, April 11, at 8 p.m.
She will be presenting a masterclass on Tuesday, April 12, at 2 p.m., both events in Walker Recital Hall, located in the Audrey Hirt academic building, with three Mercyhurst music students.
The three music students are senior Meghan Mooney-Ryan, freshman Grace Ferrara and freshman Kayla Bravchok.
This is Cho’s first time playing at Mercyhurst University.
The founder and director of the Roche Visiting Artist Series, Albert Glinsky, Ph.D, said he is excited to have Cho perform here at Mercyhurst.
“She is a world class player and to see someone who won an international prize right before she makes her big debut in New York City is kind of a thrill because we are the preview audience,” said Glinsky.
“It should really be an evening of enjoyable music because she is a really dynamic musician,” said Glinsky.
“It is also important for her to do ‘try out’ concerts before the big deal in New York City, which is a very good thing for her; the more people who invite her to play before her big debut.”
The former music department chair at Mercyhurst, Glen Kwok, is now the executive director of the International Violin Competition of Indianapolis.
He is one of our direct connections and one of the reasons why we are able to have Jinjoo Cho perform here.
“Now she is going to be traveling all over the world, the connection through Kwok makes us very lucky to get her because she is probably not going to be giving that many concerts prior to her big Carnegie Hall debut in May.
So, this is a preview of what audience members will experience in New York City just about a month later,” Glinsky said.
Cho is on the faculty of the Cleveland Institute of Music and Oberlin college and she lives in the Cleveland area and is also a local connection.
Kwok contacted Glinsky about a year ago and asked if he would be interested in booking Cho because she wanted to do some preparation concerts before her debut.
“I always have my eye out for who is good for next season,” Glinsky explained.
The artists that the series brings here are always two-day residencies where the artist performs on Monday night and then gives a masterclass on Tuesday afternoon, both of which are free to the public.
The masterclass is an open lesson where the three Mercyhurst students will publicly perform and be coached by Cho.
“It is a neat chance to figuratively go backstage to get a more personal connection with the artist that performed the night before,” Glinsky said.
This program ranges from modern composers to romantic era Clara Schumann to Debussy.
The program of the concert are “3 Romances for Violin and Piano” by Clara Schumann, “Sonata in G minor for Violin and Piano” by Debussy, “Fantasy for Solo Violin” by Ellen Taaffe Zwilich, “Sonata for Violin and Piano” by Corigliano and “Carmen Fantasie” by Waxman.
It is refreshing to see female composers being featured in concert at Mercyhurst.
Do not miss out on being a part of the audience that will be one of the very first to see Jinjoo Cho perform this program right before her Carnegie Hall debut in New York City this May.
Also, do not miss your chance to see her behind the scenes following her concert.