‘Matuto’ will perform in WRH 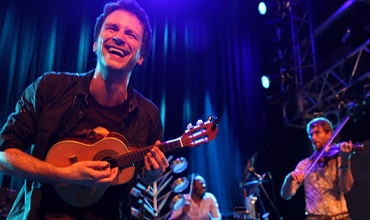 The band ‘Matuto’ that will be performing at Mercyhurst.

The word “Matuto,” is not just the Brazilian word for “country boy.”
A Brazilian Bluegrass band adopted the name “Matuto,” which perfectly describes how their music combines the rich Brazilian tones with American jazz, blues, bluegrass and folk. Matuto has traveled all the way from New York City, and will land themselves in the small city of Erie at Mercyhurst University.
On Thursday, April 7, at 7:30 p.m. in the Walker Recital Hall, you can experience the eccentric sounds of Matuto.
The intermingling of human culture manifests in the melodies of Matuto.
Their music allows them to ask the question, “What does it mean to be human?”
According to band member Clay Ross, they are “questioning the boundaries and borders of the present and past.”
Matuto has three recorded albums, the third of which they describe as “a musical snapshot of the five countries on [their] 2013 State Department-sponsored tour.”
Clay Ross and Rob Curto founded Matuto in Brazil in 2009.
Two quickly grew to five, and the band now includes exotic instruments such as the cavaquinho and the zabumba.
It is no wonder why their music has such an “infectious rhythm,” that is adored by the Cultural Arts Director at the University of Wisconsin.
The band has performed as the featured showcase artist at WOMEX and at the World Music Festival.
According to the festival coordinator, the band was a “killer addition to World Music Festival Chicago: 2013.”
Matuto was also named the U.S. State Department musical ambassadors in Africa, Europe and the Middle East.
The artists’ passion for music cannot be overstated.
Matuto sees its music as an attempt to answer the question of “what it means to embrace and treasure sounds from outside the musical world you were born into.”
Matuto travels all over the Americas, spreading their musical messages to the other continents. This performance will be no exception.
For those that are 21 and older, there will be beer tastings before the performance from Erie’s Lavery Brewing Company.
Tickets are available for adults for $15, seniors and military for $12 and students and youth for $9.
Mercyhurst Student Rush Tickets are available the day of for $5.
Do not miss this once in a lifetime opportunity to explore culture in a way you never have before.