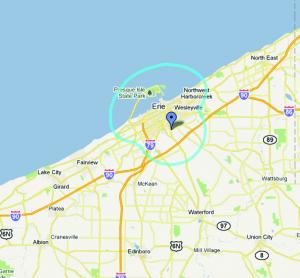 Mercyhurst College did not choose to sell 104.9, and neither did Jazz FM Director Mike Leal.

The college didn’t own it.

Bill Shannon, a former Mercyhurst employee and the former station manager, bought the frequency from the Federal Communication Commission (FCC) for $1 in 1984, and on Feb. 22, 2011, he sold it for $62,500 to Citadel Broadcasting, according to the FCC website.

For the previous 10 years, Mercyhurst had a contract with Shannon allowing the use of the frequency at no charge. Shannon was the former manager of WMCE. That agreement expired three years ago.

When Leal found out that Citadel Broadcasting was interested in purchasing the frequency, he contacted the college but received no response.

“I did ask the school if they were interested in pursuing the idea of purchasing it, but I never received any official word back from them, just ‘heard’ that administrators were not interested in helping to pay for it,” Leal said.

Over the years, the FCC gave permission to increase power to the 88.5 frequency, and it is now three times stronger than 104.9. Thus, the sale “should not affect listeners at all,” Leal said.

“Since he was actively selling it, we felt it was important to turn it off and alert our listeners to tune to 88.5,” he said.

The station will remain in possession of the 104.9 broadcasting equipment, which will be used as “a back-up auxiliary for 88.5. In other words, (the equipment) will be used as a back-up in case we lose power to our main transmitter,” Leal said. He noted that Shannon only owned the license, not the equipment.

Why should listeners care?

The main importance, Leal said, is to “alert listeners and get them used to hearing the jazz signal on 88.5 FM, especially as we get closer to our Spring Membership Drive later in March.”