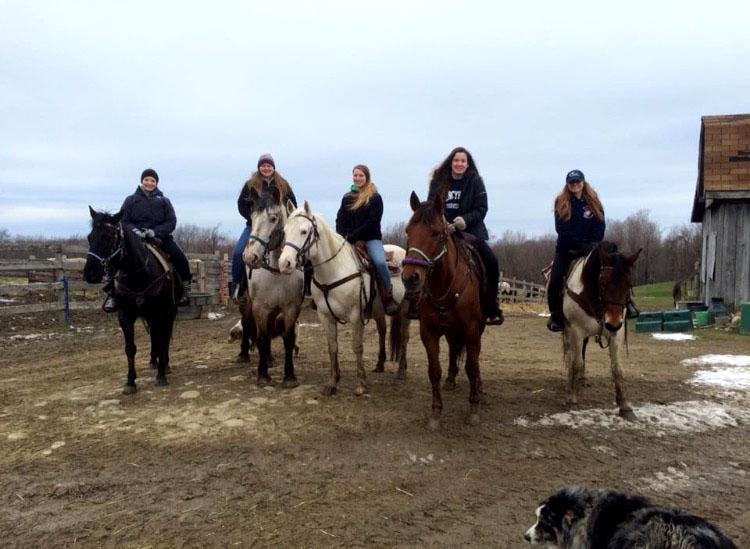 Mercyhurst’s Equestrian Club took an off-campus adventure to trail ride in Riply , N.Y. The club’s members are mostly students who like being around horses, but the club is open to anyone interested in horses.

“The club is for anybody’s who’s interested in equestrian activities,” Karima Elsayed, current vice president of the club and next year’s president said, “they don’t have to have previous experience. It’s a great way to get experience and be part of a smaller community of people.”

Some members do have extensive experience with the animal. Many have grown up around horses, taken lessons and some even want to become veterinarians.

“I have ridden horses for my entire life, and when I saw Mercyhurst had a club I thought it would be a great opportunity. I also wanted to continue riding even though I was away from home,” Nora Wagner, secretary of the club and next year’s vice president said.

Mostly, the club initially attracts members that have experience with horses by catching their eye at the club fair in the beginning of the year. Both Elsayed and Wagner have been involved with the club since their first year at Mercyhurst.

“I have always loved horses. I live on a farm and have a horse. I wanted to get the chance to ride more and do activities that involve horses. I was very excited when I found out as a freshman that the club existed,” Elsayed said.

However, this club does not require any past experience with horses. They encourage anyone to join as long as they have an interest in working with or learning about horses.

“I would love for other people to share that same kind of experience even if they don’t have prior knowledge of riding or horses, even if they just have an interest. I would like for people to see how amazing of an experience it is to ride a horse,” said Elsayed.

Many schools do not have an Equestrian Club for students simply interested in horses and recreational rides. However, there are many clubs and teams who compete.

“What sets us apart is that we accept members with varying riding backgrounds. Some have been riding their whole lives while others haven’t ever rode a horse until now. We also get to travel off campus for trail riding. Just being an equestrian club sets us apart because most schools don’t have one,” Wagner said.

The club tries to get members out and riding on trails as much as possible, but they hold a number of different activities for members with different levels of interest.

“We do movie nights, haunted hay rides and of course trail rides. We also encourage our members to volunteer at TREC whenever possible. We try to do something every one to two months depending on weather,” Wagner said.

The club works with a local organization the Therapeutic Riding Equestrian Center (TREC).

“TREC is basically a local organization that provides riding therapy for children with special needs or mental illnesses. So basically the volunteer would lead the horse around while the child rides the horse. We can also groom the horses and spend time with them. We also help get them ready for the child to ride,” Elsayed said.