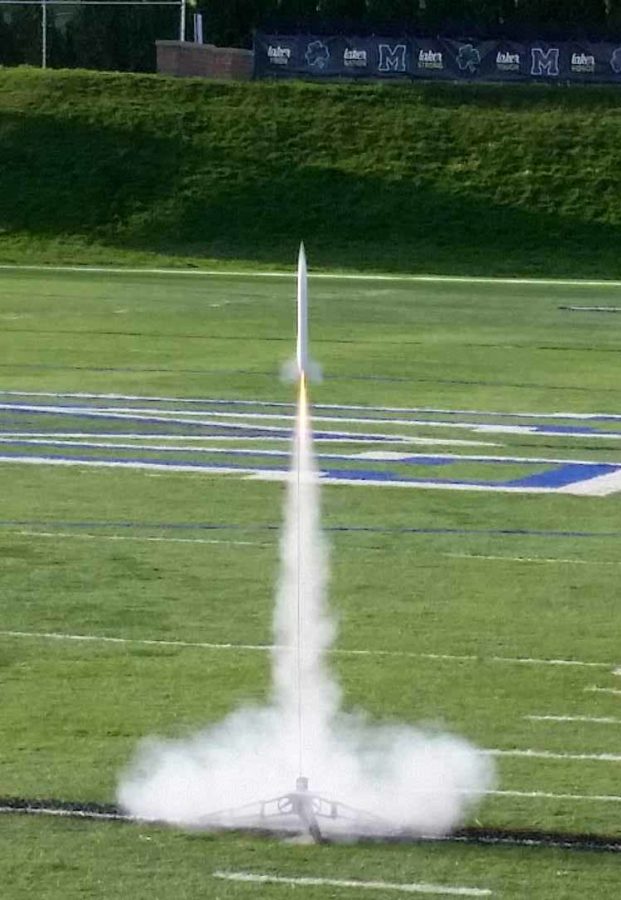 One rocket launching on Monday, April 25 as part of the Voyage to Terrestrial Planets class.

Blast off! Nine students in the Voyage to Terrestrial Planets class created rockets to launch from Tullio Field on Monday, April 25.

The rockets were originally set to launch last Wednesday, April 20. However, due to some wiring issues, and the wind and weather, the launch was rescheduled.

One student, junior KayLeigh Rogers, launched her rocket on April 20.

Rogers’ rocket was able to take off, but separated into two pieces and ultimately crashed. Insufficient glue caused the separation.

After some adjustments were made, and the wind and the Erie weather permitted, the class gave it another go.

“We fixed the wiring and just launched all the rockets just fine the second time around,” Rogers said.

One even ended up on the roof of one of the athletic buildings.

“The rockets go up well over a hundred feet in a few seconds,” Scott McKenzie, assistant professor of Geology and Paleontology director said.

According to McKenzie, parachutes do not accompany the rockets when they come back down.

Only a ribbon is attached to it, which is usually enough to slow them down to avoid crash landing.

This project made the class realize that this line of work would be very difficult.

“The rocket project gave the class a great insight on the complexity of space travel. It was difficult to put the rockets together with the rocket kit and time provided. I can only imagine the difficulty that aerospace engineers go through with the real thing,” Rogers said.