‘Hurst and Eat ‘n Park team up to renovate Egan 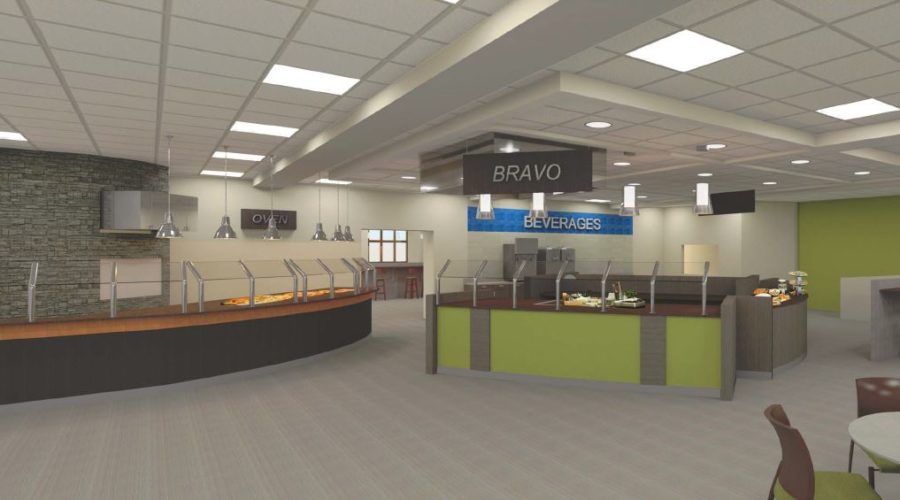 Egan Dining Hall is getting a $3 million makeover this summer.

In a news conference on Tuesday, May 3, President Michael Victor presented Egan’s redesign, which includes updates that include a chef-attended allergy station, 50 “technology benches” with outlets for charging, and relocating the entry so students will not have to wait outside in the cold.

“The design of Egan Dining Hall has remained untouched for the last three decades. So, today, thanks to a combination of Mercyhurst capital funds and a $2 million contribution from Pankhurst [Dining], I am proud to announce an estimated $3 million renovation of one of the most popular venues on our campus,” Victor said.

Jeff Broadhurst, president and CEO of Eat ’N Park Hospitality Group, the parent company of Parkhurst, agreed that Egan is overdue for a tune-up.

“Parkhurst has been [at Mercyhurst] for seven years now, and what’s fascinating is, as [Victor] said, this facility has been sub-par for all seven years and, quite frankly, three decades now. For the first time, in the next few years, we’ll have a facility that will be an oasis,” Broadhurst said.

Victor elaborated on the updates, noting that the improved dining hall will have a contemporary interior, new food service equipment, two cash registers at the entrance and all new furnishings.

The food stations will include a salad bar, grille, breakfast bar/dessert area, deli, daily dish, “Oven,” “Bravo” and Take-Care Kitchen, and they will be spread throughout the dining hall. Victor also assured staff that the smells in the stairwell will go away with these updates, which will be completed by next fall semester.

“We’ve worked really hard so that [the new design] has everything we needed,” said Dausey. “I’m most excited about the fact that we know that there are so many students that eat here for three square meals a day.

“We wanted to increase the options available to them, while at the same time improving the quality. We wanted to make it so it’s a place that students want to go to and a meeting place — it’s not just a place you go to eat; it’s a place where you go to meet with your friends and associate,” he said.

Dausey also commented on why the University is putting so much money into the dining hall.

“I think that this is a very good investment. [Egan] is such a frequently used space on campus — arguably, especially for freshmen and sophomores, maybe the most used place on the entire campus. So, as we’re looking to dedicate scarce resources, in terms of what we can renovate, it made complete sense that this is the place is where we would focus our time and energy,” Dausey said.

While the administration thinks Mercyhurst’s funds should be spent on Egan, and they feel students will greatly benefit from these renovations, some students do not feel the same way.

“I’m a little confused as to why $1 million is being put into a cafeteria that we already have, and that works, rather than putting money into something more useful, like building up educational departments or giving students more opportunities to study abroad,” said Griffin. “Also, as an athlete, I think I can speak for a lot of students on campus in saying that the athletic center is sub-par, and it’s in more need of remodeling.”

“I think Egan is pretty OK right now. One million dollars is a lot of money, and I don’t think there are a lot of things [in Egan] that need updating. I agree that they should renovate it, but I think they should save money for other things. I don’t think this should be a top priority,” Simovic said.

While some students are disgruntled, others agree with the administration and are excited about the new dining hall.

“I like food, and I’m excited for more options and a nicer facility,” said Sophomore Public Health major Katie Appell. “I come to Egan a lot, and I definitely wouldn’t mind everything being updated.”

Junior Business Management major Kelsey Branch major agrees with Appell, and she is looking forward to socializing in the updated dining hall.

“As of now, I go to the Laker more than I go to Egan, but maybe if Egan was nicer, then I’d go there more,” Branch said. “I like the idea of a communal space and socializing with people, but right now the Laker is just easier and faster. I’d like to see that change.”

Whether students support this decision to update Egan or not, the school is excited to present the improved dining hall next Fall.

“Our beautiful campus has always had that certain ‘wow’ factor, and now our dining hall will, too,” Victor said.

This redesign is based on student feedback, so the comment cards in Egan are especially important at this time as they can influence how the dining hall operates in the future.

Renovations are scheduled to be completed by this September, in time for the beginning of the school year.