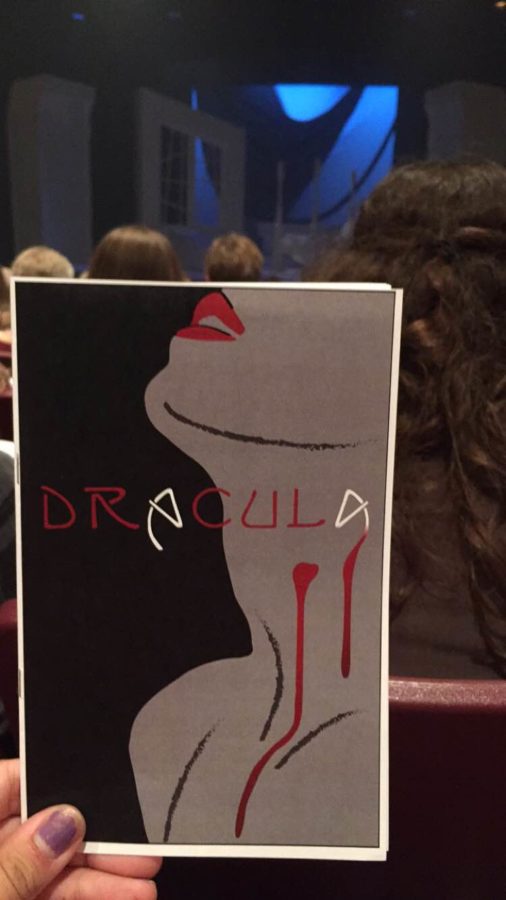 The "Dracula" playbill that was handed out before the show.

Monsters fill our world. Although they are visions from our nightmares, sometimes these monsters have a story of their own to tell. From Aug. 24 through 28, the Mercyhurst Theater Program presented their chilling version of the classic story of “Dracula.”

The play is based on Bram Stoker’s novel by the same name, and the play kept very close to the original text. However, Guest Director Doug Powers, Ph.D., and the cast of the show put their own unique take on the tale, allowing audiences to see Dracula and the vampires for more than just fanged fiends.

Upon entering the theatre, I immediately had great appreciation for the use of space and elegant stark white set. Coming from a high school with a stage a bit smaller than that of Taylor Little Theatre, I knew how difficult it can be to work with. Their use of lighting for the multiple location changes and primarily stationary set pieces was done very well, artistically and logistically.

The show began by introducing the asylum prisoner, Renfield, portrayed by Ashley Poletto, who gave an outstandingly chilling performance. Renfield’s constant presence on stage during the entire show was very interesting to me. It reminded the audience of his presence in the characters’ lives and his unfortunate immortality. From there we learned about Mina (Bethany Sulecki), her fiancée Harker (Cole Prots), Lucy (Sarah Krempasky) and Seward (Michael Rowe) and the horrors that befell each of them because of Dracula.

The show’s first act was primarily exposition, but it moved quickly and appropriately for the audience. The real action began during the second act after Dracula bit Lucy, beginning the hunt to end the vampire. The role of Dracula, portrayed by Luke Ballantyne, was slightly different than what people may have expected. Instead of the traditional (almost cartoon) version of Dracula we always envision.

We were shown all of the mysterious and villainous ways of the vampire. However, with the help of unique costuming and the supporting characters Van Helsing (Brett Johnson, Ph.D.) and Mina, Dracula’s victimization was also a major part of the character. At the climax when the vampire is brought to his demise, the truth is revealed that Dracula was a good man who met an unfortunate fate just as his victims did.

Both Lucy and Mina were very complex characters, but the actors successfully took us along the unfortunate journey with them. They helped the audience enjoy each unique personality at the beginning of the show and fear for their sicknesses and transformations towards the end.

I also enjoyed seeing Johnson acting alongside his students, and felt that it worked well with the idea of the close community that is the Mercyhurst theater program.

Every character in the show made the audience feel their chemistry and comfort level as actors and their concern, love and even fear of one another as characters.