Faculty collage: not an art piece, a music concert. 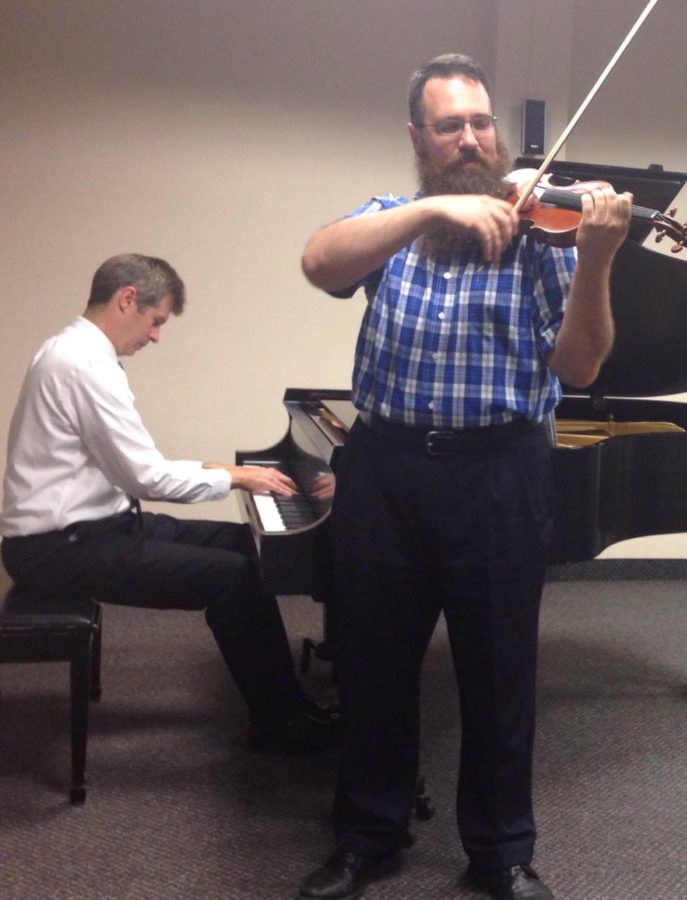 Nathan Hess, D.M.A., and Jonathan Moser, M.M., are two of the performers for the Faculty Collage concert.

The Mercyhurst University Music Department kicks off their Faculty Recital series for the 2016-2017 school year with their Faculty Collage concert on Sept. 14. This concert features a diverse program that is made up of four pieces and one aria.

The aria will be sung by James Bobick, baritone, and will be accompanied by Nathan Hess, D.M.A., on the piano. The aria is the well-known ‘Largo al factotum’ from Il barbiere di Siviglia (The Barber of Seville). “I chose this particular aria because it is universally recognizable, can be an entertaining tour-de-force and because Nathan Hess, our department chair and an incredible pianist, offered to perform with me. What could be better?” Bobick said. He has performed this piece many times throughout his singing career.

Jonathan Moser, M.M., will be performing a piece called ‘Ferdinand the Bull’ for Violin with narration by Alan Ridout. The narrator for this piece is Louisa Jonason, M.M., the assistant professor of Voice and Director of the Opera Program. Moser’s first exposure to the piece was when he was about 13 years old, but he could not find this piece again for 15 years until his wife found it in a little music shop. “The story is about Ferdinand the Bull and for a lot of people this story is not as familiar as it was for my generation,” Moser said. If you have seen the movie “The Blindside,” it was the children’s book that Sandra Bullock reads to her sons after they found the book in a bookstore. “It will be masterfully told by Ms. Jonason and it is just a very fun story. The music of the piece illustrates the story as a picture would in the book by coloring what the narrator says,” Moser said.

While this may be Moser’s first Mercyhurst University faculty concert, he has performed with a few of the faculty members in the past. He has played with Christopher Rapier, the French Horn professor, in the Erie Philharmonic. He has also performed with the Cello instructor Robin Hasenpflug, M.M.

Jonathan Nolan, M.S., will be performing Usher Waltz, Op. 29, by Nikita Koshkin for Classical Guitar. Nolan chose this piece because it is something that he rarely gets to play. “The piece is based on Edgar Allan Poe’s ‘The Fall of the House of Usher’ and has many changes in tempo and dynamics as does the main character’s mentality in the story. I enjoy performing this piece and turning listeners on to a composer they may not have heard of,” Nolan said.

Hilary Philipp, M.M., will be performing ‘Oboe Concerto’ by Bohuslav Martinu and will be accompanied by Hess. She will also be a part of a woodwind trio playing Huguenin’s Trio No. 2 for clarinet, oboe, and bassoon. The other two performers for the trio are Rebecca Wunch, clarinet, and Sarah Elizabeth Lee, bassoon.

The Faculty Collage concert will take place on Wednesday, Sept. 14, in Walker Recital Hall at 8 p.m. The concert is free and open to the public.