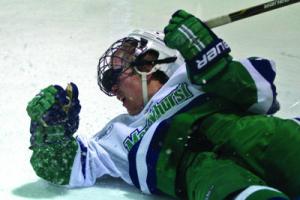 Ethan Magoc photo: Mercyhurst College freshman Taylor Holstrom was a major bright spot during the Lakers rocky season.Over the course of a season, many college hockey teams need to fight through injuries and harsh schedules to come out on the other side as a stronger team.

For the Mercyhurst men’s hockey team, this is an understatement.

The Lakers fought through a season loaded with injuries. Six forwards who started the season on the team were not with the team by season’s end. Key players such as starting defensemen Pat Goebel and Kevin Noble had to fight off nagging injuries that cost them a combined 19 games.

Senior forward Steve Cameron missed six games this season after missing eight last year from a concussion, and freshman Kyle Just left the team after he and goaltender Jordan Tibbett were charged with sexual assault.

Despite all the adversity, the Lakers managed a sixth seed in the playoffs. They beat a Robert Morris team that most guessed would advance well past the first round. The Lakers handed RMU a 5-1 loss and advanced to face the University of Connecticut in the second round.

Against the Huskies in a best-of-three series, the Lakers’ rocky season finally came to a close. Even in defeat, the Lakers played hard and fought back from deficits to make both games extremely competitive.

In game one, the Lakers were in a two-goal hole after the first period before tying it in the second. In the final game of the Laker season, the team fell in a three-goal hole only to come back and force overtime. In the overtime loss, the Lakers outshot the Huskies 56-32 but were unable to take the lead.

“We played very well against Robert Morris, but against (Connecticut) we just couldn’t score. Our guys played their tails off,” coach Rick Gotkin said. “I’m very proud of how they played and the season they had. They came to the rink every day and did everything we asked of them.”

The team finished with a 15-18-4 record, but given the issues this team has faced it was a very solid year. Two top forwards accepted professional contracts mid-year, two freshmen were charged with sexual assault, and only seven players played in every game.

Through it all, the team played hard and stuck together.

“We have the makings of a real good team. We proved we can be very competitive even without some of the guys and were right there in the conference. We can take the situations from this year and learn from them and come back stronger next season,” Gotkin said.

The Lakers return a strong core of players next season, headlined by freshman forward Taylor Holstrom and sophomore Paul Chiasson, along with returning defensemen Noble and Goebel.

Despite a long, brutal season, the Lakers are hoping the hard times are behind them and can again climb atop the Atlantic Hockey Association in 2011-12.