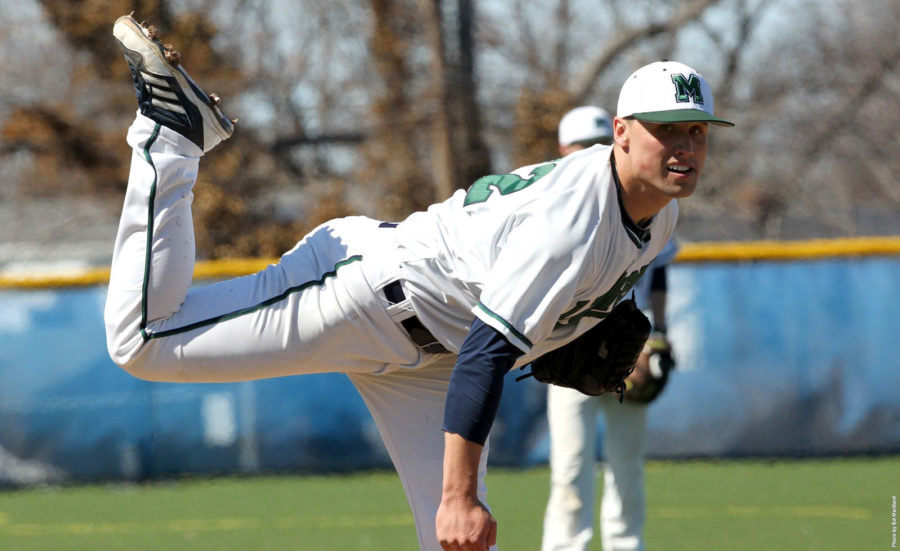 Dan Altavilla, former standout from Mercyhurst, got promoted by the Seattle Mariners to play in their A-team

When they say “It’s a great day to be a Laker,” something major is usually about to occur. In this case, the promotion of former baseball standout Dan Altavilla to the Seattle Mariners on Aug. 27 could not epitomize that more. The highest draft selection in school history—heading to Seattle in 2014 at pick 141 and the first non-Division I pick of the draft—he spent time at Single-A Everett and Bakersfield and Double-A Jackson over the past three seasons.
Altavilla dazzled in his subsequent debut at U.S. Cellular Field, working a perfect eighth on just nine pitches and striking out White Sox All-Star Todd Frazier to end the frame.
An impactful player, he garnered high praise from his former teammates and even those who never saw him play. “It just gives us respect, not only the Mercyhurst program but (all of) Division II,” said current Lakers catcher Sabatino diNardo III. “It shows that we can play ball just as good as any other division or league that we play in. And we’ve proved it every year; we’ve won 40 games every year. It just gives us more of a better name and respect to … Division II … as a whole.”
Altavilla, a native of Greenock and graduate of Elizabeth-Forward, caught the Lakers by surprise with a fast arm and progressed and developed his skills quickly. He began his tenure with the Lakers in the 2012 bullpen. He won five games and saved another while recording a 0.91 ERA with 38 strikeouts and a .168 opposing average in just 29.1 innings of work.
In the second game of an April 27 doubleheader at Gannon University Field, Altavilla worked 3.2 innings of relief and punched out six Golden Knights in arguably his best performance of the season. The following year, he made the transition to a starting role struggling to a 5.17 ERA and an even 5-5 record but did record 27 of his 66 punchouts on a called third strike.
Altavilla ensuingly won nearly every major pitching award at the Division II level, including a spot on four All-American First Team rosters, becoming the first Laker since 1998 to have at least one. He was later named Division II Pitcher of the Year by four different organizations, arguably the most prestigious of which being the inaugural winner of the Brett Tomko Award, given to the most outstanding Division II pitcher.
Regarding a major factor to his success, his pitch count and his success in general, Joe Spano, Baseball’s head coach, commented, “Dan is a pure strikeout pitcher, and I think we allowed him to go out and be a strikeout pitcher again. We didn’t allow him to worry about keeping his pitch count low, and the end result was that his pitch count was (efficient). It’s awesome for our program, knowing that he came from (Mercyhurst). The Mariners are just lucky to select him high enough. They saw his strengths, and he’s very intelligent as well as being a really good baseball player.”
At Double-A Jackson, Altavilla found his niche in the bullpen. He appeared in 43 contests with seven wins and 16 saves, posting a 1.91 ERA and allowing a .196 clip with 65 strikeouts and just 22 walks over 56.2 innings. With this, he sits at No. 22 on MLBPipeline.com’s current Mariners prospect rankings.
Spano notes Altavilla used his time with the Generals to not only build his confidence, but also “cut his pitches loose, because he knew he only has to throw one inning at a time, so that was a great decision by the Mariners to give him that role.”
Altavilla was then promoted straight to the Mariners, inheriting a 9-2 deficit to the White Sox in the eighth inning last Aug. 27 at U.S. Cellular Field. Needing just nine pitches in the frame against the heart of Chicago’s order — seven for strikes — Altavilla induced two 5-3 groundouts to Melky Cabrera and José Abreu, and then struck out All-Star Todd Frazier on four pitches.
Spano believes Altavilla will remain in the bullpen with the current state of the Mariners’ pitching staff but believes he will flourish.
“I can only hope and pray that he’ll be in the major leagues for a long time. We’re very appreciative that the Mariners gave him this chance so quickly, because obviously that gives him a chance to have a longer career in the major leagues. You just hope he’s a mainstay in their bullpen for many years to come.”