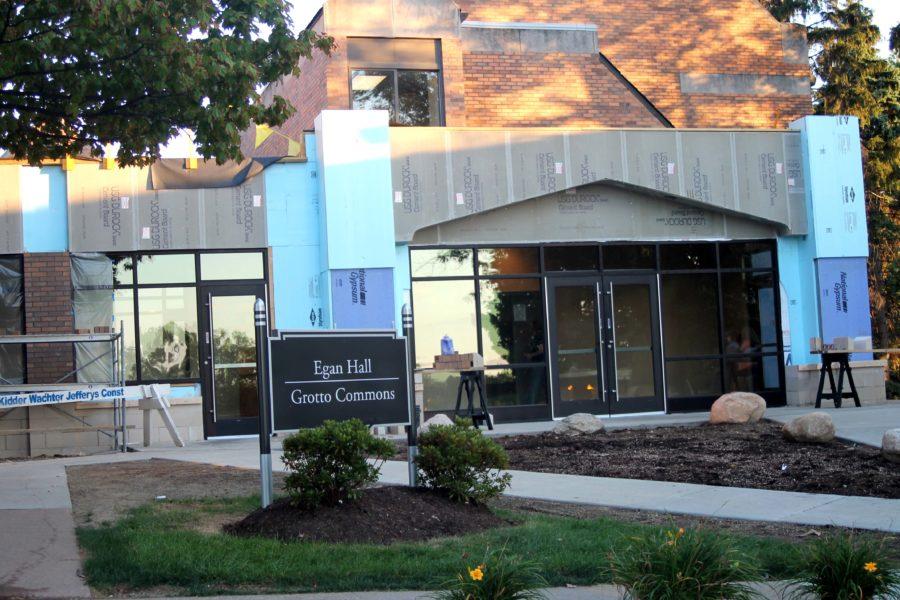 Outside of the newly remodeled Grotto Commons, where parts are still under construction.

Another year has begun at Mercyhurst and it is already groundbreaking. The class of 2020 is the largest class ever enrolled at Mercyhurst, President Victor was officially inaugurated this past Saturday and the new Grotto Commons is officially open.
Plans for the new Grotto Commons, previously known as Egan Dining Hall, were unveiled at the end of last year and renovations started in May. It is the first large scale project to be put in place by Victor.
The $3 million dollar project was completed in time for move-in day on Aug. 20, so the freshman class would be the first to eat inside the new dining hall. Victor wanted to spice up the old dining hall so that it matched the excitement and modernity of the students it feeds.
The general consensus of Grotto Commons has been a positive one. Upperclassmen, who have now eaten at both the old and new dining halls, have commented on how the flow of the food service is much better and that it gets a lot less congested than it used to.
“I just love that the pizza is still in the same spot and still tastes the same,” junior Jenny Sabliov said.
The underclassmen seem to enjoy it as well. Using their unlimited swipes, they can come and go as much as they would like, and the Commons is never empty of people during open hours.
The look of the Commons is more up-to-date than Egan’s decor. With the new furniture, there is plenty of seating for the large capacity of students it serves every day. Plus, with the new setup, the spaces between tables are more open, leaving more space for walking without tripping on chair legs and book bags.
“The bar counter has outlets so I can do my homework there without worrying about my laptop dying,” junior Zarah Pratz said. Now students can study while enjoying the all-you-can-eat buffet.
Despite the positive feedback, there have been a few reservations about the new setup. As with anything else, something new takes time to get used to and everyone needs a few days to adjust.
“I think the place looks nice, but I had trouble finding everything for the first few days, especially after being used to the old setup,” Alex Deakin, an upperclassman, said.
When students first walk in, they said it was not obvious that the Grille is in the back corner or that the cafeteria has another section apart from the main food selections.
“I stood in there for five minutes trying to find where the steak dinner was being served on ’Hurst Day,” junior Rachel Dunmire said.
It seems as though the new name has not quite caught on, especially with the upperclassmen. Many still walk around campus, referring to the dining hall as Egan and not the Commons.
Change always takes some time to get used to, but overall the reception of the new Grotto Commons is off to a great start.