Faculty Recital Series is off to a great start 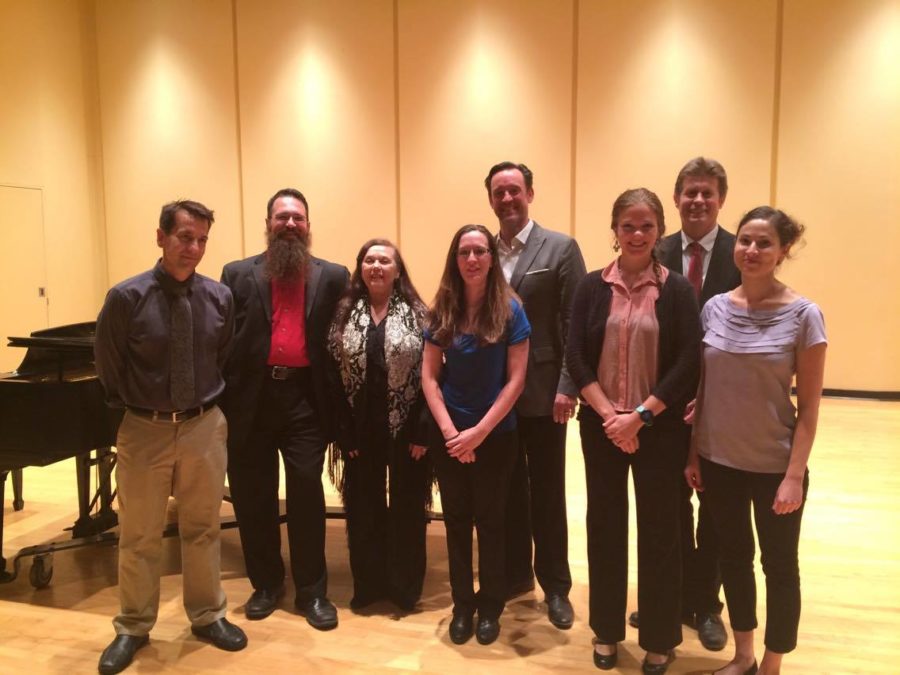 This was the first music department event of the school year, and I was super excited to start writing reviews of the events again.
I opened up the program and I was greeted with a wonderful blank page for my peanut gallery of notes.
I believe every program should have a blank page on the inside cover because I think the Music in Society students would really benefit from such a page for note taking.
The first piece, “Largo al factotum” by Gioacchino Rossini, performed by James Bobick, had me transported back in time to watching the television show, Tom and Jerry after school.
He made some very intense eye contact with the audience and I loved how he got into character as he sang.
The second piece was arguably my favorite, but I am biased because my favorite instrument is violin.
Jonathan Moser is a new addition to the Music Department, and the length of his beard is quite a feat.
The piece he played, called “Ferdinand the Bull,” with Professor Louisa Jonason taught me something that I already knew: that bees really do try to ruin lives.
I do not believe I have ever heard solo oboe, so that was an experience. Nathan Hess, D.M.A., was not wearing the velvety jacket that he was predicted to wear so that was a mild letdown, but his accompaniment to the oboe was phenomenal.
I am easily awestruck by all things music, so when Professor Jonathan Nolan played “Usher Waltz” by Nikita Koshkin without a pick, I was pretty impressed.
I would think his fingers probably got pretty sore after a while. Unless there are no nerve endings left there.
I was very confused over the name of the piece titled “Trio” by Gordon Jacob.
I thought it was weird because although it was called “Trio,” there were four movements.
Granted, I had just had one of the longest days of my life, it should not have taken me as long as it did to figure out it was so named because there were three musicians playing said piece.
The musicians were Hilary Philipp, Sarah Elizabeth Lee and Rebecca Wunch.
I got to see faces I had not seen perform last year at this year’s Faculty Collage, and I was very impressed with all of the performances.
I am looking forward to future events and cannot wait to write some more amusing reviews over the course of the year.