Clarion comes back in tough loss for Lakers 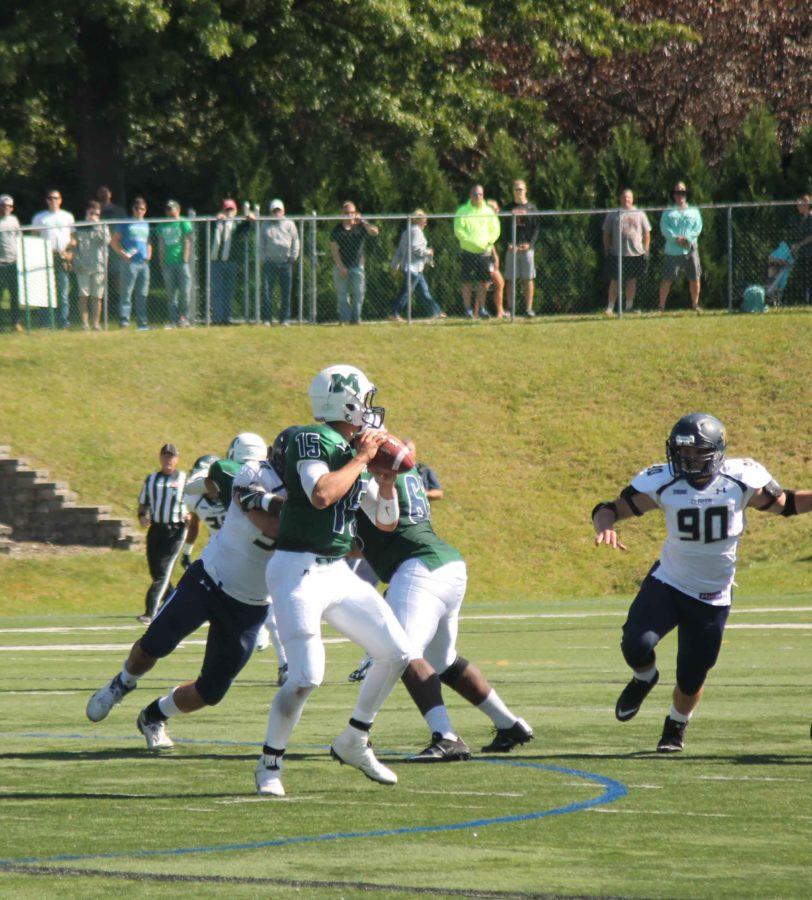 Quarterback Doug Altavilla threw a 19-yard touchdown pass to wide receiver Brad Novak in the fourth quarter, but it was not enough to put Mercyhurst over Clarion. The Lakers lost 35-34.

The Mercyhurst Lakers football team, at the end of the first half, looked like they were going to come away with a win to cap off an exciting Homecoming Weekend. However, a big rally by the Clarion University Golden Eagles and a gamble at the end resulted in the Lakers leaving with a loss.
Coming off the previous week’s home loss, the Lakers started strong, getting the only score of the first quarter with a 16-yard touchdown pass thrown by redshirt quarterback Doug Altavilla to wide receiver Brad Novak.
In the second quarter, Mercyhurst scored again, with Altavilla again throwing, this time a deep 89-yard pass to Brian Matthews.
The Golden Eagles had a scoring drought almost until the last minute of the second quarter when they were able to put up a touchdown. The Lakers were able to answer this with a drive and a 1-yard run by Altavilla to end the first half up, 21-7.
With such a strong first-half performance, the Lakers looked prime to continue their dominance. Running back Richie Sanders punched in another touchdown with a 7-yard run that put the team up by 21. At this point, there was still 6:47 left on the game clock. Unfortunately, this was where the tide turned against the Lakers.
The Golden Eagles began their comeback with a touchdown on the next drive. They ended the third quarter trailing by 7 after a second score. Part of the reason for such a rejuvenation was the strong performance of the Clarion offense in the second half. Strong individual performances came from running back Delrece Williams, who ran 211 yards for 24 carries and scored a touchdown, and quarterback Connor Simmons, who completed 21 of 38 passes for 313 yards. He also scored two touchdowns on runs and connected with a receiver for a score.
The fourth quarter began with the Lakers still up, but Williams punched a score into the end zone that tied the game with 12:04 remaining. The Lakers were unable to score with their follow-up drive, which allowed Clarion to finally gain the lead for the first time in the game, taking Mercyhurst 35-28 with 6:08 left to play.
Time was not the enemy yet, but the Lakers had to rally against the resurgent Golden Eagles. The team got within Clarion’s 15-yard line, but Altavilla threw an interception that gave the Golden Eagles the ball back with 3:03 left.
At this point, things looked grim. However, the Lakers’ defense made a stand, and it allowed the offense to get the ball back for one more shot with 1:08 remaining. Clarion then added to the sense of the tide returning to Mercyhurst’s favor by a shanked punt that allowed Mercyhurst to take up shop at Clarion’s own 37. Several snaps later, Altavilla threw to Novak to put the score at 35-34, Clarion.
The Lakers then made the decision to go for it all, opting for a two-point conversion. Everything had seemed to click into place for a comeback. There appeared to be some sort of uncertainty from the Lakers, however, as the line was changed several times. This culminated with the play clock ticking down, and Mercyhurst was penalized and pushed back 5 yards.
Despite the setback, the Lakers proceeded with their plan on the next snap. Unfortunately, Altavilla was unable to connect with his target, and Mercyhurst failed to get the two points that would have regained the lead. The Lakers did not throw in the towel immediately afterwards, as they tried an onside kick, but then Clarion recovered the ball and ended the game with possession.
With the loss, the Lakers fall to 1-3. Wide receiver Novak reflected on the game.
“Looking back on the game, it was quite a heart-breaker. Any time you lose by a small margin like we did on Saturday … it’s a tough loss to get over,” Novak said. “Every close game has a handful of plays that decide the outcome of the game and that could clearly be seen on Saturday.”
Novak had two touchdowns and 97 yards from receptions, as well as one on a run.
“Clarion is a very solid team,” Novak said. “They have been since I first played them. On Saturday, they showed a lot of grit and determination, as they were able to come back from a rather large deficit.”
On Oct. 1, the Lakers will play at noon at Gannon. Novak said he was “very excited for the game” and that “it is always a great atmosphere and a great matchup between Western Conference rivals.”