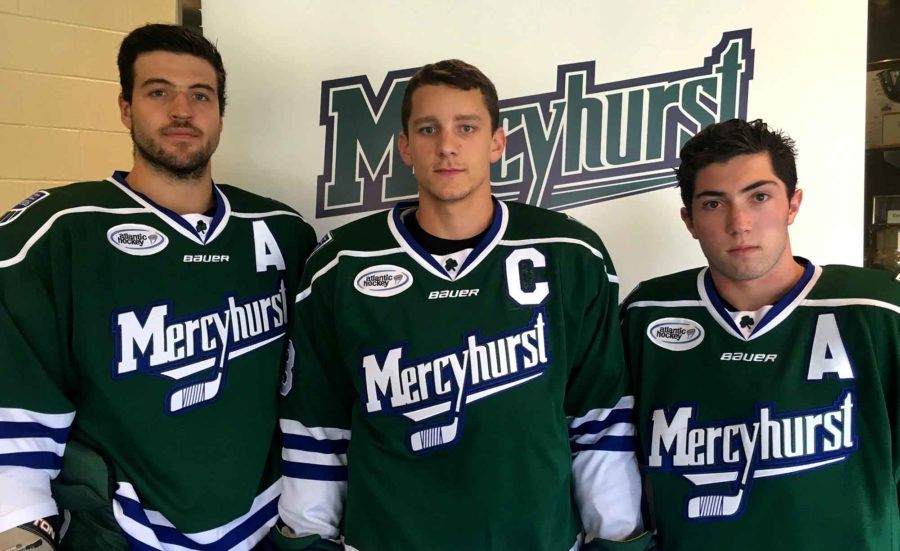 In the buildup to the 2016-2017 season, the Men’s Division I Ice Hockey Team has made its captain selections who will lead the team onto the ice this year.
Jack Riley, who had previously served as an alternate captain for the 2015-16 season, will be this year’s team captain based on team voting.
Riley, a junior at Mercyhurst who will be entering his third year on the team, had eight goals and 20 assists for a total 28 points last season.
The alternate captains for this year are senior Kyle Dutra and sophomore Derek Barach. Dutra had eight goals and 10 assists, while Barach had 10 goals and 22 assists.
Both will act as assistants to Riley throughout this season. All three players saw action in all 36 contests of last year.
Only in his second year with the Lakers, the team felt Barach was the right choice for alternate captain.
“Obviously I was surprised to be named captain … but it was exciting and an honor that my teammates and coaches consider me a leader this early into my college career,” said Barach. “We have such a close team that no matter who is speaking up, people listen and respect what he has to say.”
Barach also highlighted what the team mood has been leading up to the exhibition game against the University of Guelph on Saturday.
“The preseason mood right now is excitement and competitiveness. We are excited for the season to get going because we know we have the pieces to be a really good hockey team. But our biggest goal right now is just to take it step by step, day by day, and compete as hard as we can in practice because it will only benefit us when the games start to roll around.”
The first game of the regular season is Oct. 14. The Lakers will be playing Penn State at Erie Insurance Arena.
Mercyhurst’s first AHA conference game of the season will be Oct. 18 against Niagara University.
For this year’s team, the Lakers’ strengths will “be our skill from top to bottom,” said Barach. “We are returning a bunch of our top scorers. Our biggest challenge will be playing sound and responsible defense because there is no doubt in my mind that we will be able to put the puck in their net. (We) just need to keep it out of ours.”