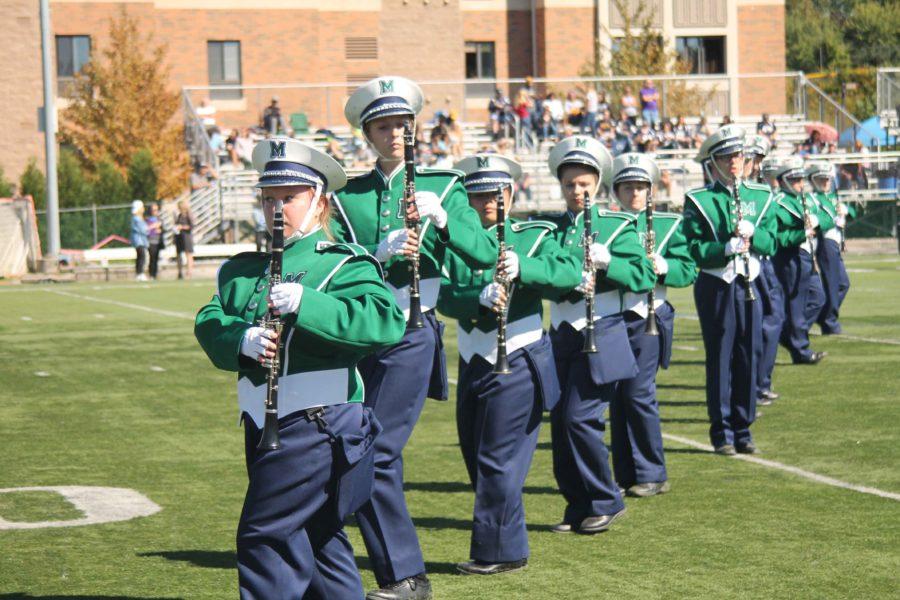 It started off with a bonfire on Friday evening. On Saturday, the tailgate began at 11:30 a.m., followed by the football game against Clarion University at 1 p.m., and lastly, the Fall Ball at 7 p.m.

Lots of blue and green could be seen among the crowds of people wearing school colors to show their Hurst spirit. This included alumni, students, faculty and families of Mercyhurst community members.

“I think the spirit on campus is really high. Everyone gets really excited for the football game. Everyone getting together sets a good tone on campus,” Holley said.

At the tailgate, there were many free items for students, including hats, cowbells and food — one of the main attractions for students. Attendees had the choices of hamburgers, hot dogs, veggie burgers, chips, cookies and drinks.

“My favorite part of Homecoming is the free food and free stuff. It is also another opportunity to be with friends,” said Ashley Espinoza, sophomore forensic science major.

Mercyhurst football faced Clarion University. The dance team, the cheerleading squad and the marching band were also big components during the football game in keeping the school spirit high.

The game started off on a good note with the Lakers ahead of Clarion, 21-7, at halftime. During the second half, Clarion dominated the field for a comeback. The Lakers were just one point shy of overcoming the Golden Eagles as the game ended, with the final score standing 35-34.

Gianna Gallese, senior dancer and biology pre-PA major, shared her experience of Homecoming over her past four years.

“My favorite part about dancing at Homecoming the past four years is the chance to be a part of something that brings the Mercyhurst community together in its entirety. The boys always play a great game, win or lose, the fans are amazing, seeing alumni back to where their friendships started, there’s nothing better,” said Gallese.

Alumni also enjoyed this weekend, which allows them to come back to their alma mater and celebrate being a part of Mercyhurst’s community.

Lindsay Frank, director of Alumni Engagement and a 2012 graduate, speaks very highly of Homecoming Weekend and its benefits.

“I can just say that Homecoming Weekend is one of my favorites all year. It’s a time when alumni come back to campus, and they really feel like they’re coming ‘home’ because that is what Mercyhurst is to so many alumni,” said Frank.

“Coming home means seeing your classmates, roommates and friends again, but also professors and staff. The whole weekend is all about being a Laker and celebrating that spirit. You better believe there will be a lot of green and blue.”

The Fall Ball took place at 7 p.m. in the Baldwin lot under a tent. It included food such as meatballs, chicken kabobs, various puddings, fruit cups and fruity drinks.

Along with the DJ playing music for the students to dance, students also had the opportunity to use a photo booth to take pictures with their friends. The atmosphere was very energetic throughout the night.

“With the dance being outside, it gave us more room. The food was great,” said Jordan Pendel, junior anthropology/archaeology major, archaeology concentration.